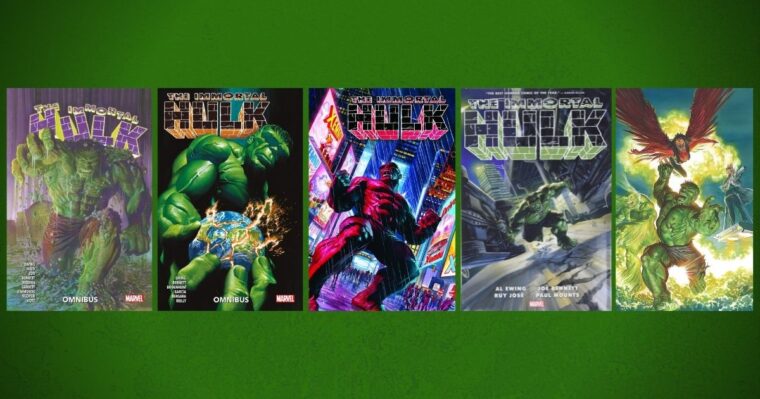 The Immortal Hulk is the new on-going comic book series that offers a fresh new take on the character. In this story world, Bruce Banner doesn’t simply turn in to the Hulk when he gets angry; the Hulk only appears at night. And if Bruce happens to die during the day, the Hulk still comes back at night and Bruce is fine. Bruce can be killed, but he always comes back. He is the Immortal Hulk.

In it, Banner seems to have multiple personalities who manifest in different human and monster versions. The Devil Hulk is the one who seems to be in control at the moment. He is a dangerous version of the monster and we see and feel the horror of it all.

I hadn’t read a Hulk comic in years but this one captured my attention right away. I binged the first 50 issues and was quite impressed with it. It might just be the best comic series currently in production. You can read 10 volumes of the trade paperback or the first three omnibus collections plus volume 9 and 10 to catch up on the series.

The series is dark and unlike any version of the character you have read or seen on screen. But it is still accessible even if you are not a die-hard fan. The story is very well written and the art perfectly matches the vibe. Several Marvel superheroes and villains show up throughout the series as well.

Need a new read, why not try this one?

Watch for This Title on the Bookshelf

Living Her Life Out of Order