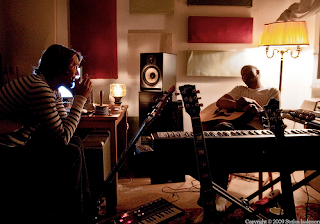 Slakah the Beatchild is a talented producer who has worked with artists such as Drake, Divine Brown, Glenn Lewis, Nelly Furtado and Melanie Durrant. He is in the groups Art of Fresh and Slakadeliqs.

Tingsek is a soul artist and producer from Sweeden.

I caught up with them both at the 2010 Stylus DJ Awards. You can download the podcast of this interview for free, you can read the transcript below, or you can stream the interview with the player at the bottom of this post. Of course, you could do all three. Stream it now as you read and download it so you can listen to it whenever you like.

Without further ado, here is the transcript of the interview.

Chase: “Alright everybody this is Chase March. I’m hear with Slakah the Beatchild and Tingsek. How’s it going?”

Chase: “Excellent. So I hear this is your first time in Canada.”

Tingsek: “It is. I’ve been here for two weeks. All thanks to this guy right here, Slakah. I’m loving it.”

Chase: “Nice. So Slakah, we play a lot of your songs. You’ve been making some noise for a while, producing a lot of different artists. So how did you get started in the production game”

Slakah: “Ya know what? Music has always been a part of me. It’s like how a hand is part of my body, music is a part of who I am. It’s just always been there. As I got older it grew and manifest itself into who I am and it was inevitable.”

Chase: “That’s the best answer I’ve heard all night. That’s awesome. Music really is inside of you right? If you have it, you have it.”

Chase: “It’s like Jordan Sparks, right? It would be like No Air if we didn’t have music. It’s just so much a part of you, it’s so ingrained, it’s just like breathing to some people.”

Chase: “And we’re here at the 2010 Stylus Awards and it’s pretty awesome that this is honouring producers and DJs. I mean. the MCs are still here but the focus is on where this music started from. Everything that is hip-hop or club or dance or any of the music that we are talking about today is all based on the DJ. That’s the original. That’s where it came from right there.”

Chase: “Definitely. So you’re a producer but do you deejay as well?”

Slakah: “I do DJ sometimes as a part of my set because I’m all about delivering and giving people music that they wanna hear, that makes them feel good. I like evoking emotions and if it’s by performing, by spinning music, whatever the medium be, I want to deliver that emotion. So I do incorporate spinning into my set. I wouldn’t call myself a DJ but I can spin, ya know what I mean?”

Tingsek: “I definitely know what you mean. I’m not a good spinner but seriously, DJs are really important for music so it’s great to be here to give the love to the people who actually promote that.”

Tingsek: “DJs are in the same game that we are.”

Chase: “Yeah, it’s guys like us here at DOPEfm, who do this for the love. We’re on college radio. We do a seven hour overnight show on Saturday and I don’t see money for that. I’m blogging and doing podcasts and things like that out of the love for it. So it’s awesome to be able to sit down with and meet people who I spin their music. I’m so glad to be here.

So Slakah, can you tell us a bit about your creative process?”

Slakah: “My creative process begins in my heart. Your heart is the central place for emotion and to me, that’s the most important thing with music. It has to pull at your heartstrings because if it can do that, it’s gonna last forever.

And timeless music is so essential to everything. I think of artists like Stevie Wonder, Michael Jackson, Bob Marley. The music they made was timeless. Why was it timeless? Because it evoked an emotion. So when I make music, I try to get on the same plane as that. Evoke an emotion so that the music is timeless.”

Chase: “Do you use samples? I know some producers are getting away from samples and it’s almost been a trend lately that sampling is out but it seems to me like it’s coming back in.”

Slakah: “One of my favourite producers is J-Dilla. J-Dilla can take a sample and make it sound like it wasn’t a sample. You can’t recognize what sample he used. So he’s turning a sample into something musical. So I do sample but he’s my teacher. So when I make music and I sample, I try to make it completely different from the original sample. I try to reinterpret it but I do also play original music as well. I use the best of both worlds. Sometimes I combine them, sometimes I do all original, sometimes I do all samples. How about you man?”

Chase: “Yeah, I started with production a long time ago and I had an AKAI sampling keyboard and if you wanted a crisp sample you could get like one second of it because of the sampling time. So I would spread samples over several keys and replay them and chop it up, and like you said, make it unrecognizable. You’re not just gonna hear a David Bowie sample and automatically recognize it, or Rick James, ya know?”

Chase: “So I respect when producers can take something and chop it up like that and it’s an artform unto itself as well.”

Tingsek: “Absolutely. That’s what I was trying to say.”

Chase: “It’s cool. You don’t have to use it, you can use both, like you say. It’s also interesting to see how hip-hop is using a lot more live instrumentation now too. It’s really expanding.”

Tingsek: “The musicians need to get credit. That’s what it’s all about really.”

Slakah: “That’s where it all started.”

Tingsek: “That is where it all started. Being able to play an instrument and compose on an instrument is not just something you learn in a day. It’s a lifetime. I’ve never produced hip-hop. I’m a soul producer but just now hooking up with Slakah and other producers, it’s a whole new world to me and I’m so intrigued. I’m just at the beginning of getting to know this world. This is great!”

Chase: “Very, very cool. Are you active online? Can we find you on Twitter?”

Chase: “How about you Slakah?”

Slakah: “Just to add, Tingsek, he’s really humble but this dude’s music will change your perspective on how you hear music. You have to listen to this guy’s music.”

Chase: “Well, we definitely will. Thanks for giving us this CD. We’ll be spinning that for sure. Thanks a lot for sitting down and talking with us. It’s been an honour.”

Slakah: “It’s been a pleasure.”