I borrowed both of these graphic novels from the public library. It’s nice to be able to explore space for free (from the safety of my living room). 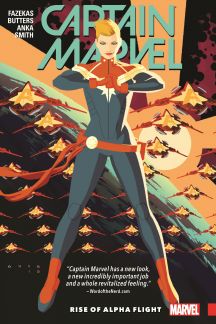 I’m not too  familiar with the character of Captain Marvel. I know of her from Civil War II and from her brief appearance in the new series of Ms. Marvel. I also didn’t have any experience reading Alpha Flight comics so this was a new experience for me, as it probably will be for many readers.

It starts out with Captain Marvel taking command of the Alpha Flight Space Station. And it seems like she has moved from active hero to a desk job. But of course, all sorts of problems happen when an alien vessel approaches. Not only does she lose her powers but it seems like everything is connected to how she got them in the first place.

It was nice that we didn’t get a straight-up origin story, but one that helps to establish some of the backstory of the character, throw her into a new role and situation, and anchor a brand new series.

And when the universe has been saved by the end of the story, Captain Marvel’s powers have been restored, and everything looks like it will be business as usual, she sits down at her desk on the space station to relax. Just then, an alarm goes  and she springs back into action. No desk is going to keep her down. 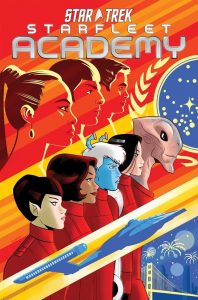 I don’t like the timeline of the cinematic reboot of Star Trek. It doesn’t feel natural for the crew to be all chummy at Starfleet Academy as presented in this graphic novel. As such, it was difficult getting into this story. It felt like the characters were in the wrong place and time. It was hard to get my head around.

The story is centered around a female Vulcan and her days at the academy. These scenes take place right after the destruction of her homeworld (as seen in the first movie).

Interspersed with that story, Uhuru uncovers a message that leads her to believe something is wrong in a quarantined area of space. Of course, these two stories are related and though the two characters don’t actually meet, they help uncover the mystery together. Kirk and Spock are also in there for good measure.

It took me a minute to get into this one because of the time difference, but overall, it was a good read.

Ghost and Laundromats Come Together in “Sheets”