I did a lot of reading this summer. Here is a list of what I read. I didn’t keep track of all the graphic novels that I got from the public library so this is not a complete list.

I’ve often thought that I should keep a detailed reading log. Perhaps this will be the start of it. 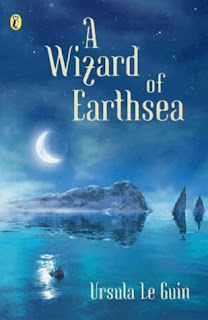 A Wizard of Earthsea by Ursula LeGuin

Description: Ged is a reckless youth who does not know that he will grow up to become the greatest wizard in all of Earthsea. In his thirst for knowledge, he accidentally sets forth a terrible evil upon the world. He learns how to control himself and his powers over the course of this and subsequent novels.

Why Read It?: This book is a classic and has won numerous awards. It was written well before the popular Harry Potter series. If you are familiar with those books, you will draw some interesting parallels as you read it. 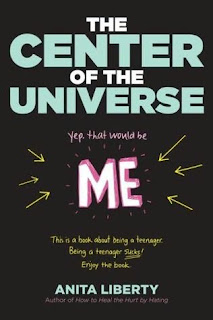 The Centre of the Universe: Yep, that would be ME by Anita Liberty

Description: Anita tells us the story of her years in high school in her own words. She shares with us her personal journal, poems, charts, words of advice, her witty observations, and even dictionary words as she studies for her SAT.

Why Read It?: I love how this book looks. It called to me from the library’s bookshelf. I sat down and flipped thought it right then and there and I knew I had to read it. The book is written from the perspective of a sixteen-year-old girl, who just happens to share the name of the author. I know that it is fiction but it looks like this young girl invites us into her life and you get to know her personally. That is part of the appeal to this book. Of course, the story is compelling as well. It’s open and honest and I like how it throws a lot more into the book other than just straightforward narrative.

A Word of Caution: This book contains Mature Themes and Coarse Language. Within the first forty pages, I came across the F-word. I thought that it reflected the way students talk and if it only happened once in the book, I think I could’ve overlooked it. But the book is chopped full of inappropriate words. The teenage main character also has sex for the first time and speaks frankly about how much she enjoys it. She also begins to smoke weed.

I enjoyed the book or I would’ve returned it to the library unread. But it is a teen book and as such, I would caution parents and teachers out there about letting your children read it. 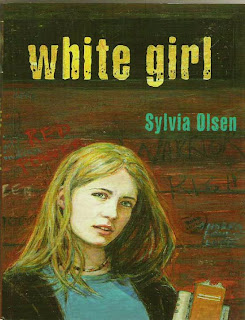 Description: Fourteen-year-old Josie finds herself living on a First Nations Reserve after her mother marries an aboriginal man. They move in with him and his son. Josie was used to blending in and finds it difficult to be the only white kid in school and to adjust to her new blended family. She moves from feeling like an outsider to experiencing the richness of her new life and community.

Why Read It?: I think this novel would appeal to anyone who has ever felt out of place. It deals with First Nations people without serving us blatant stereotypes. It is set in modern times so it is accessible to teenagers as well as adults. There aren’t enough novels that are realistic depictions of the Rez, and for that note alone, I think this is a good book to read. The book deals with race relations, bullying, and the importance of community and these are issues that all teenagers can relate to.

A Word of Caution: Some of the girls get quite mean to each other in the text and there is a fair amount of swearing in their exchanges. However, this only hammers home the issue and isn’t gratuitous at all. I think this book would be great for anyone who have never had much exposure to First Nations peoples, and it would be equally great for First Nation readers as well. 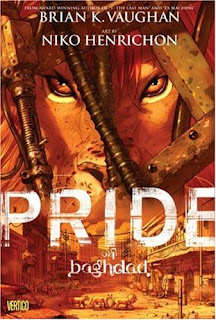 Pride of Baghdad by Brian K. Vaughan and Niko Henrichon

Description: The captive animals in the Baghdad Zoo have fantasized about escaping for some time now. Most of the animals don’t seem to trust each other enough to band together and plan a break out. The head lion is well respected and tells wide tales of his life on the outside of the zoo walls. During the Iraq war, the zoo is bombed and people look to him for guidance when they do finally escape.

Why Read It?: This graphic novel transcends the genre. This story is amazingly well told and drawn. It captivated me from the very first page in a way that I really wasn’t expecting. I believe that this work is accessible to pretty much everyone. It deals with the war in ways that aren’t really threatening to children. The work explores what it really means to be free as the lions find it difficult to survive outside of the zoo’s wall. This book could be read as an allegory and would be a great basis for discussion on the concept of freedom, war, and family.

Accolades: In the July 2009 issue of Wizard Magazine, Pride of Baghdad is ranked in the top 100 graphic novels of all time. I completely agree that this book deserves to be held up along with the great books of out time. I highly recommend it. 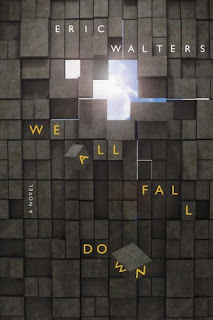 We All Fall Down by Eric Walters

Description: Will is a grade nine student who isn’t too excited about spending a day with his father at work. It’s a school assignment that he would rather not do. He’s upset that his dad has a boring job on the eighty-fifth floor of the World Trade Center. His teacher tells him that tomorrow “might be an experience that changes your entire life.” Of course, no one at the time knew how much truth there was in the small statement. Tomorrow is “Take your kid to work day” and it just happens to be September 11, 2001.

Why Read It?: Eric Walters has won numerous awards for his young adult fiction and he continues to write stories that engage readers of all ages. He lives in Mississauga and can serve as an inspiration to students. He was originally a teacher and only wrote to help encourage his students but now he writes full time. This book could be used to get students thinking about historical fiction and the role that 9/11 had on the world. It is fast-paced and deals with issues that teenagers can easily relate to.

City of Ember by Jeanne DuPrau

Description: The residents of the City of Ember live in a completely dark world. They are running out of resources, the most important of which seems to be light bulbs. The residents are forced to live on smaller and smaller rations every day. They also do not have the knowledge of how things work. The residents don’t really know what to do about these problems and carry on with their day-to-day lives as if nothing is amiss. However, two recent graduates realize that something is terribly wrong with their city and try to do something about it.

Why Read It?: It’s a page-turner that I simply did not want to put down. There is mystery and adventure in it. It is also the first of a five book series that has become quite popular. This book was adapted into a movie last summer as well. However, the movie pales in comparison to the book. I wrote about this book already in my Recommended Reads series here.

The People of Sparks by Jeanne DuPrau

Description: This second book of Ember takes up right where the first one left off and continues the story. I don’t want to give any details out here so that I won’t spoil it for any of you who haven’t yet discovered this series.

Why Read It?: It picks up the thread of the first book and is very-well written and paced.

The Prophet of Yonwood by Jeanne DuPrau

Description: Nickie travels to Yonwood with her Aunt Crystal to a large mansion that her grandfather used to live in. Aunt Crystal wants to clean up the house and sell it as quickly as possible. Nickie hatches a plan to keep the house and to live there. She makes some interesting discoveries about the town, the house, and her grandfather in the process. A local woman there has some terrible visions of the future. The residents take her visions as seriously and brand her a prophet. However, they might go too far in what they do because of these visions.

Why Read It?: You have to be a fan of this series to read this one. It is definitely the weakest book of the series. It is essential a prequel to The City of Ember that I feel didn’t need to be told. I didn’t like the pacing of the book either. It seemed to rush through the history leading up to the first book in the last few pages. I wasn’t impressed with this book at all. 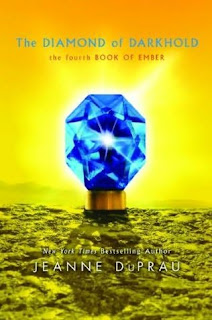 The Diamond of Darkhold by Jeanne DuPrau

Description: This book is a sequel to second book and picks up right where The People of Sparks left off.

Why Read It?: Duprau recaptures the essence of the series. The book is a page-turner with mystery, action, and adventure. I’m glad I didn’t give up on the series after book three. I really enjoyed it. That being said, I recommend skipping book three and jumping right into this one. However, at the end of this book there is a brief mention of the last book that sounds like it could lead into a fifth book.

Ember Update: At this time, Duprau has no intention of writing a fifth Ember book. I think that there is a story there that could make the third book more relevant in the series but for the time being, I can safely say it’s worth skipping the third one for now. Since it’s a prequel, you could always read it later anyway.