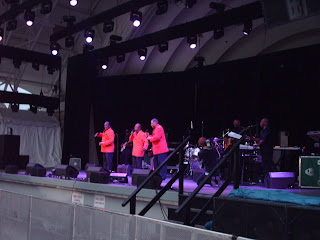 Today, we have a special treat for all of you. An interview with legendary R&B group The Manhattans. You can download the podcast for free, stream it with the player below, or just continue reading.

Chase: “All right everybody, this is Chase March. Daddy J and I are here at the CNE with three members of The Manhattans. We have Al Pazant. He’s the bass vocalist. We have Lee Williams, the lead singer. And we have Charles Hardy, second tenor.

Welcome to the CNE fellows. It’s nice to be able to talk to you. It’s Motown night here at The Ex. What do you think is the appeal of Motown music forty years after its original run?”
Al Pazant: “It’s very popular. In the heyday, people were singing and playing and sending a message that people could relate to. Love songs, ballads. As far as The Manhattans are concerned, we’re known for ballads, for love songs. Every time we perform, the audience sings the songs right with us. We have young people as well as old people coming out to the shows. It’s a good thing.”
Chase: “It’s definitely amazing to see. The first song The Manhattans came out with was in 1964. And here we are in 2011 and The Manhattans are still doing their thing. Not a lot of groups have that kind of longevity. A question I wanted to ask was, quite often when groups change members, they form a new band or get a new name. How hard is it to maintain The Manhattans with different musicians?”
Al Pazant: “Well, I’m not an original member but I’ve been with the group for twenty years. They always try to get people that could portray or sing the songs in a way that the band had always done it before, so we could always carry on a legacy. We’ll always be able to continue.
We’re in the process now of going back to the studio to come out with something new that will attract the attention of the younger generation but still have and maintain the flavour of the original Manhattans.”
Chase: “Wow, that is amazing. Getting back to the studio to make new jams.”
Al Pazant: “Right, we always have to try to keep going.”
Chase: “I was also going to ask, you’re playing the same songs all the time, and for you, for twenty years now, does that get boring. How do you keep that fresh?”
Al Pazant: “The people keep it fresh with you. Once you get out there and start singing, people start singing it with you. And once you see the reaction of the crowd, the music is never dead.”
Charles Hardy: “Every audience is different. Just like Al was saying, you have younger kids coming up that have heard their parents playing our songs, and their parents have played our songs. It’s just trickling down from generation to generation. These younger kids are adapting to the older sound, more so. Even though hip-hop is still there, love songs will never die. They will never, ever die. It’s always gonna be like.
After you be partying, after you dance all night long, you’re going to want to hear a slow song somewhere. Hopefully, it’s one of the Manhattans, ya know? But with the audience, you’ve got such a variety. You keep it fresh that way. The younger ones get used to what is happening right now with us, The Manhattans, and maybe they’ll carry it on down to their children. Just like Al was saying. The legacy will just continue, continue, continue.”
Chase: “Hip-hop makes use of a lot of Motown and R&B samples. They are taking pieces of older songs. How do you guys feel about sampling?”
Lee Williams: “Sampling keeps the songs that happened from the 60s, 70s, and 80s. They are the songs people relate to. They have those moments where they can sit down and make piece with their wives, their loved ones, and so forth. So they play the songs that are there.
I think having samples keeps the songs out there as well. That’s good, as long as we get our business from it. That’s what counts. It’s good that right now, we’re in the studio, getting ready to come out with new songs. It never goes away. The younger kids were conceived while a love song was playing by The Manhattans, ‘Kiss and Say Goodbye’ , ‘Shining Star’ , they are the ones they’re singing. They think it’s a new song.”
Al Pazant: “It’s really true, sampling does help keep the music alive. People hear just a little bit of it in someone else’s song. I can get in the elevator some place and hear ‘Shining Star.’ You go in the grocery store and you hear it. It’s keeping the music alive.”
Daddy J: “I was singing it on the way here.”
Al Pazant: “It’s still alive. It’s still going.”

Read Part 2 of the exclusive interview with The Manhattans.