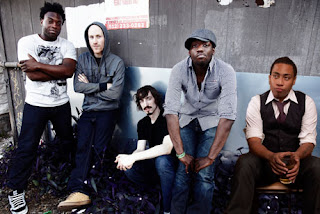 Last month, I had the honour of interviewing Canadian hip-hop group, Grand Analog. I have transcribed the interview for my blog but you can catch the whole thing as a podcast at the DOPEfm page. We had a lot of fun on the radio and I hope you will check it out.

Chase: “All right everybody, this is Chase March and I’m here with Grand Analog at Call the Office in London, Ontario. They’re about to go on stage shortly. We have the chance to sit down and talk with Odario. How ya doing man?”

Odario: “I’m good. Buzzing around Ontario like it’s one big city of something.”

Chase: “Yeah. I’m glad that we finally got a chance to do this because we tried to hook up last time you were here and we ended up missing each other.”

Odario: “Yeah, yeah, you gave me a false address,”

Chase: “Well, it was just because I worked and I couldn’t get there in time but it’s good that we could finally make this happen.”

Odario: “Oh yeah. Thanks for having me.”

Chase: “So you’re in town tonight opening up for Shad.”

Odario: “That’s right! Ya know, it’s the man’s hometown. I can’t step on too many toes but I’m really looking forward to it. I didn’t have the chance to really rock London, Ontario last time we were here at Fanshawe College ‘cause I really wanted to know the insides of London, Ontario. So this is my chance to really get into the nitty gritty of this place.”

Chase: “Nice. I hope people are familiar with your music because Grand Analog is fairly new. You’ve got two albums out, your latest one, Metropolis is Burning, which has been getting a lot of airplay on a lot of different stations. You also have some videos going so hopefully people are familiar with that. But I was first introduced to you from your old group, Mood Ruff.”

Chase: “That was my first taste of you as an emcee and I liked what I heard there, definitely. And when I first heard Grand Analog, I thought, ‘Oh, this is a reggae group,’ until I dived into it a little further, than I realized there’s a lot more to it than that. But you’ve got some reggae songs and reggae-type songs and some dance-type songs, so Grand Analog is more of a mixture, I suppose, of genres.”

Odario: “I thought the time would be right for that kind of thing. When we started in 2006, it just seemed like it was a good time to experiment with different things and I realized that hip-hop didn’t just have to be the simple beats and rhymes formula that we’re used to. And that’s Mood Ruff was in my previous days, but with Grand Analog it was more of a freedom thing for me. I grew up on reggae, I grew up on punk rock, I grew up on funk, and there was no reason I couldn’t include all of those elements into what I’m doing now.”

Chase: “Definitely. So how did the name time into that? What does Grand Analog mean?”

Odario: “Obviously I’m a product of hip-hop, and if you go to the root of hip-hop, in the old school, a lot of cats were calling themselves Grand; Grandmaster Flash, Grand Melle Mel, Grand Wizard Theodore. So, it was my little take on that. And, of course, the anolog is the throwback to the type of music we sample and experiment with, ya know 70’s reggae that was all done on analog tapes in pretty much a sweaty dungeon in Jamaica. A lot of old funk and stuff was done on analog. So there you have it.”

Chase: “Nice! I was thinking it was more so because you were using a live band and instruments and things like that.”

Chase: “Well, I think we should play one of your tracks right now, let the listeners hear the funky vibes that you’re putting down. So should we start off with your latest single?”

Odario: “I think that would be a great idea.”

Chase: “Your latest single is ‘Take it Slow’ and once again, it’s got that island kind of vibe to it.”

Odario: “That’s the one, People will understand what you’re talking about once they hear that.”

Chase: “It’s a nice track. So let’s throw to that right now. This is ‘Take it Slow’ from Grand Analog off of the album ‘Metropolis is Burning.’ This is Chase March, we’ll be right back with DOPEfm.”

Chase: “All right, that was take it slow by Grand Analog. Nice song there.”

Chase: “So how do you go about writing these songs? What’s your process?”

Odario: “Ya know, I need to hear some kind of groove to know what the theme’s gonna be. For example, ‘Take it Slow,” that you just heard, we had a groove going. It didn’t sound like that at the time, obviously, because that’s a well-polished track, I must say.”

Odario: “But when it was a really rough idea, I still needed to play around with that before I knew what it was about. And getting that idea, I was clearly thinking about chilling back, taking it slow, thinking about girls that I used to like but I don’t anymore. And the idea came around, so yeah, I have to say that’s definitely the process. I gotta hear the groove first.”

Chase: “I guess a lot of emcees work that way, they take the track and they build from that and it inspires them.”

Odario: “But some songwriters they like to sit with lyrics and then create music around it. I know for sure that I can’t do that. I’ve got a couple friends on their pianos and guitars and they have a lyric in their head and their idea is to create song around that lyric. I don’t think I’ve ever tried that.”

Chase: “Last time I talked to you, you were at a record store. I think you were digging through something.”

Odario: “Do you remember the name of that record store.”

Chase: “So we’re in London right now at Call the Office. You’re going on shortly and I’m looking forward to the show. So do you sample and do your own-”

Odario: “In this day and age you just don’t want to get sued. You don’t want to get that summons letter in the mail because you’ve used someone’s piece of music. So, ya know, hip-hop has turned into a genre that had to create on its own, even though a lot of authentic hip-hop cats think that sampling is, or was, the most important part of hip-hop.

But now you need to find new means. Ya know, there’s a lot of electronic elements in there. Of course, Grand Analog itself has live instrumentation but we do sample a little bit. You just have to be creative with the sampling now. You can’t just take four bars of someone’s music and call it a day. You’ve gotta really do interesting things with it. So that’s where I do like to challenge myself and the guys. We find cool little pieces of jazz, or funk, or dub, and really recreate it into our own thing. So we’re still following the rules of hip-hop without getting ourselves in jail.”

Chase: “Nice. I think the sample police really need to stop because it’s crazy. If you take it to visual arts, I mean, you could be inspired by somebody and create something similar to another artist as long as you don’t copy your whole painting, an artist isn’t going to say, ‘Hey that’s my hill!’ So if you take a bass or a flute and you chop it and do something interesting with it, that’s new. And I think the people that are going to say, ‘You stole that,” they need to kind of stop. ‘Cause hip-hop, we are creating something new from something old just like how every other art form, basically. That’s my take on it anyway.”

Odario: “I agree. I think sampling is an art form within itself. There’s so many unearthed old pieces of vinyl out there and if you can, sort of, bring it back to the forefront and do something cool with it, I think that’s awesome.”

This ends Part 1 of our interview.

I hope you come back tomorrow for Part 2. We play some more tracks and focus on some of the lyrics. We talk about a lot of different things, and share some good laughter. This interview was so fun to do. Go and download the podcast for free and consider subscribing to the show’s podcast as we bring you the best in underground hip-hop each and every week with great mix sets and artist interviews. Thanks!