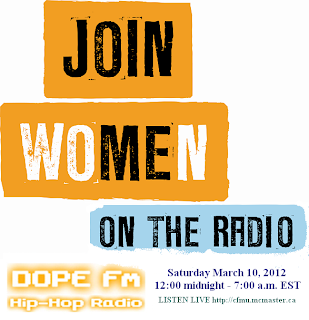 Welcome to a very special edition of DOPEfm. This is our second annual International Women’s Day Spotlight where we focus all seven hours of our programming to the Women in Hip-Hop.

We have a lot of great content for you tonight including a roundtable discussion with three female MCs and a female hip-hop promoter. Here is a small clip of what you will hear later tonight in that roundtable. . .

Lady A.S.G.: “I guess you see it much more in what people would consider the mainstream to be very negative towards women. In the underground, I mean, we have three lady MCs in the house, so what more can I say?”

A dope MC is a dope MC. Gender, race, class, etc, none of that should factor in to what makes an MC great and we have some great MCs on the program tonight. In the roundtable discussion you will hear Nilla, Kool Krys, and Lady A.S.G. We’ve been spinning their tunes for quite some time now on DOPEfm. Tonight you get to hear them talk about some important issues in hip-hop culture and how it relates to women and artists. Also on the panel is hip-hop promoter, Our Sis Sam. All four of these ladies have a lot to say. You won’t want to miss it.

After that, Gamma Krush is going to throw down some nice mixsets where every single track he plays will have been blessed by a woman, either on the microphone, on the production tip, or behind the turntables.

Speaking of behind the turntables, DJ Betti Forde will be calling into the program. We also have an exclusive interview with Money Stax. We will be sitting down, talking to her, spinning some of her great tunes from her projects Vicious Cycle, The Co-op, and Monopoly. Some great music there. You are definitely going to want to tune in, because once you hear her, you will become a fan.

Later tonight, I also have a special edition of Know Your History focusing on the first lady of Canadian hip-hop. And believe it or not she was the first Canadian artist to get a major record label deal. Her name is Michie Mee and we will be exploring her career and her music later tonight.

Lots of great things happening. Daddy J is executive producing the whole night, Gamma Krush is spinning some tunes, and I’m holding it down as usual. It’s going to be one heck of a show.

International Women’s Day is on March 8th every year and has been celebrated for over 100 years now. It’s a day to celebrate and recognize the achievements of women.

I’m going to stop talking now and spin some tunes. DOPEfm is saluting the Women of Hip-Hop all night long. Please stay tuned, download the podcast, and share the music.

Word is Bond Rap Radio – Now You See Me