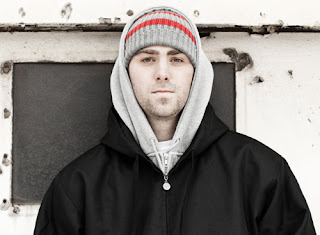 Last week I had the honour and privilege of interviewing one of Canada’s finest MCs, Classified. This was the first on-location interview I ever did for Dope FM. It is available as a podcast so please go download it for free and enjoy the vibe.

I thought it would also be a good idea to put up a transcript of it here as well. I’ve embedded some of their videos to the songs we played on the podcast, as well as a few that we didn’t play. I hope you enjoy this interview.

Chase: “Alright everybody, this is Chase March, live on location in London at the Classified show, and I’m just honoured and privileged to be sitting in front of Classified. How ya doing?”

Chase: “I’m doing great. I must say I’ve been a fan of yours for years. I’ve got your last four albums. Don’t got you new one yet. I got a burned copy so I definitely need to get it tonight, supporting the artists for sure. So it’s great to see. You’re on a tour right now? What cities are you hitting up next and how long is this tour?”

Classified: “We hitting everywhere. We doing all Canada right now. The whole tour is gonna be just over 4 1/2 weeks long. We start out west in Vancouver, going right back to Halifax. Hitting every major city and a lot of small towns, stuff like that too. So, basically playing wherever we can. Doing like 30 dates.”

Chase: “Nice, nice. I remember I was first introduced to you on the Internet ’cause I was trying to get a music career popping back in the late ’90s and I saw your name floating around a bit, but I didn’t actually see you til the “Unexpected” video. That video was really, really nice. And that was the first taste I got of Class, right about there.”

Classified: “That was actually the first video of mine that got any real play on Much Music, so that was a lot of people’s introduction to me and my music. So that was cool.”

Chase: “I’d like to show that video for my blog audience now. This is ‘Unexpected’ by Classified off the album ‘Trial and Error.’ We’ll be right back with more Classified on location at his concert.”

Chase: “That’s a great video and a lot of people’s first taste of Classified. After that you had two other animated videos that I’ve seen. So I’m just wondering, who does the animation for your videos? How did that come about that you’ve got so many animated ones?”

Classified: “The first one was done by a guy named Matt Strickland, out of Newfoundland. He did the “Unexpected” and “The Maritimes” one. And then we just did one for a track called “Trouble” off my new record and I’m not sure I remember this guy’s name. I don’t even know the guy’s name. He’s a guy from California that we just kind of hired to do a job. He’s a freelance guy that just kind of does it, ya know what I mean? He showed us some examples of his work. So, yeah, he did the thing up. But you know, animated video is just another way to tell a story, know what I mean? Ya know, to be completely real, you can do animated videos cheaper than to shoot a film video too. So, you know, if you come up with a creative way to do it, you get someone to illustrate it out, ya know, it brings the song out.”

Chase: “Nice, nice. Yeah, your videos, it’s nice that you’ve got quite a lot of them. One of my favourites videos though is “Hard to Be Hip Hop.”

Classified: “That’s my favourite video too.”

Chase: “What was it like working with a legend in Maestro Fresh Wes, man?”

Classified: “Maestro’s the man. I first met Maestro back in 2003 and he just called me up and said he was a fan of my music. So it was a surprise. I’ve been a fan of Maestro since Backbone, Drop the Needle, Conducting Thangs, all that, so. You know, when you get in the studio with Maestro, he’s an energetic dude. He acts like it’s the first time he’s in the studio. He’s got an energy. You can just tell that he loves making music. So for me that’s great. When I get energy like that, working with me in the studio, that makes me excited and energetic. So, I work with him a lot. We’ve done probably 8 or 9 tracks together, ya know, whether it’s him rhyming on one of mine or me producing for him and stuff. That’s one of my heroes of Canadian hip hop, and that’s my dude. I talk to him, like, once a month.”

Chase: “Nice, nice. Yeah, the one thing I really like about that video is that it’s kind of hard to tell what’s going on, like you’re still in a fancy car and then you got your name spelled huge beside you, and at one point the DJ’s cutting “No, this is not an illusion” And then you kind of show us how the whole video has been an illusion up to that point.”

Classified: “Yeah, man. That was Harv. Harv was the director. he’s done 3 or 4 videos for me now. He did “No Mistakes,” he did “Find Out,” he did “Hard to be Hip Hop,” and he did my new one “Anybody Listening” but he’s always got cool ideas, man. And he showed me the idea. He said, I wanna make it look like you’re in a car and I’m gonna pan out and it’s just gonna be little dinkies. I didn’t honestly get what he meant when he first was telling me about it but when he showed me some examples, ya know what I mean, I was blown away. And the way he edited, put it together, and just kind of made it all come to life in the video, like you said with the “no this is not an illusion” and then it breaks out to show you it is all an illusion. Ya know, these videos can trick you a little bit. Ya know, don’t believe the hype. But, yeah, that was one of my favourite videos so I’m glad you’re feeling it.”

Chase: “I’ve been a fan for years so it’s nice to actually be interviewing you right now.

Chase: “Yeah, I was just wondering about production because, ya know, Diamond D used to say he was the best producer on the mic, but I know you produce most of your stuff, and I’m really feeling it, so I think that title should be handed over to Classified.”

Classified: “Oh shit, I’ll take it. I’ll take it! Diamond D’s the man though. I remember when he said that line. I remember though. What track was that off of? House of Pain, was it? When he said “the best producer on the mic.” No, actually, it was the Fugees, The Score track, I think. Nah but production’s my thing, man. I’ve been making beats a long time and the rhyme thing, you know, I like doing both. ya know, the people appreciate both, that’s great.”

Chase: “Nice, so did you start rhyming and then just need an outlet for producing, or did you produce first?”

Classified: “Nah, nah, I started rhyming and needed something to rhyme on. So I started making my tape deck beats using a tape deck like this thing right here, ya know, looping it up. Then I bought my first drum machine, bought my first sampler, and kind of kept building up like that.”

Chase: “Yeah, I’m kind of old school right here because Class and I are sitting right in front of my old, huge, tape deck thing.”

Classified: “This is what I used to record on. So when I first saw you plugging into this, I came on over looking and I’m like, yeah man. That’s when I started I used to use this shit.”

Chase: “Yeah, it works. It works good. I want to talk to you about some of your lyrics, like one of your lyrics you say, “my fourth album is the first record I really liked,” so what’s the truth behind that?”

Classified: “The truth is if I go back and listen to my music now, ya know what I mean, I know I was a young kid. I started putting my records out like when I was 15, 16 years old. I was a kid who just loved making hip hop music. I really didn’t know much about it. I didn’t have that much skill, ya know what I mean, I think I was wack, I’ll be the first one to say it, know what I mean? But that’s all kind of where I came from and I grew from that and learned from that. But yeah, my first four albums, I wrote my song, I put them out, and I was like, yeah, they’re alright but I felt like there was a lot of work that had to be done and I had a lot of ways to go and by the time Information, Unpredictable, around that time, that’s when I felt like I was starting to get my groove and starting to really realize what I was doing. So I really feel that ‘my fourth album’s the first record I really liked’, man. That’s real.”

Chase: “Nice. Kind of just like learning as you’re going, paying your dues.”

Classified: “And that’s what is was. I mean, a lot of people do the same thing, but they don’t put it out there. They record the songs and nah, it’s gotta be better and better. I was just that kid, ‘yo I got ten songs, let me burn it, put it on a cassette, make up a hundred copies, and put it out and see if people like it.”

Classified. “Um, ‘This is For” is one of my favourite tracks, ‘Find Out,’ ‘No Mistakes.”

Classified: “It depends how I feel, know what I mean? If I’m feeling energetic and rowdy and just want to move, know what I mean, I wanna hear one my hyper tracks. But if I’m feeling like I want to vibe out and listen to something, I put on something with more of a message and more of a vibe to it. So, it depends on the day. Changes with the days.”

Chase: “Cool, cool. Alright, that being said. I think right now we’re gonna drop ‘No Mistakes.’ I believe this is off of Boy-Cott-In the Industry. Alright, so we’ll be right back with more Classified. Dope FM Radio.”

Stay tuned tomorrow for part 2 of the interview I did with Classified for Dope FM Radio. The interview is available as a podcast as well. Head on over to the Dope FM page and be sure to subscribe to this excellent podcast. We bring you the best in underground hip hop each and every week.

Lissa Monet at The Stylus Awards 2011