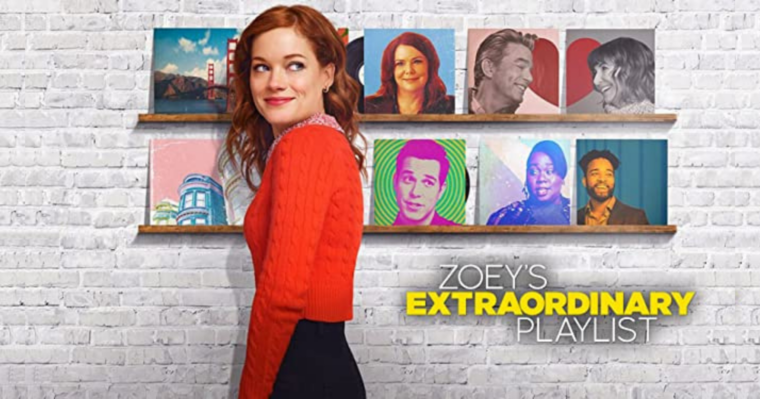 Zoey’s Extraordinary Playlist is one of those rare television shows that can make you laugh, smile, cry, and come away with a warm and fuzzy feeling after you’ve seen an episode. It is feel-good television at its best.

The show is billed as a musical-comedy-drama, which in itself is quite unique. There is something magical about this series that is hard to capture in print. The premise sounds absurd, but if you give it a chance, I am sure you will be blown away by it like I was.

Zoey’s father is suffering from a neurological disease and is getting worse by the day. Worried that she might have the same infliction, she goes to the hospital to get an MRI. The technician offers her some music to listen to while they run the scan. At that same moment, an earthquake shakes the building and millions of songs seem to be uploaded to her brain. On her way home, a flash mob takes to the streets, at least that is what she thinks. People don’t normally sing and dance like that in public, for no reason.

It turns out that there is a reason, however. Zoey has been granted the power to connect with people’s innermost thoughts. They sing to her, in what she refers to as their “heart songs.” Time seems to stop while this is happening and no one else can see or hear the music or dances.

One benefit of this power is that she once again gets to communicate with her dad, who had stopped speaking some time ago.

My wife and I discovered this show late and only finished the first season as the second one was near completion. It was heartbreaking and powerful and left us wanting to dive in to the second season right away.

When we saw the news that the show had been cancelled after only two seasons, we were heartbroken again. It is such a brilliant show. We wanted to see more, even though we still had 6 episodes left. So, we joined the Save Zoey movement and actually made a difference. The show was revived for a one-off Christmas special.

This special really left us wanting for what could have been a brilliant third season. Trust me when I say that you can skip the movie and still enjoy the series. I know it was meant to give fans closure but Jane Levy, who plays the titular character had this to say,

“I don’t really think about stories in terms of closure. I’m like, what is closure? What good play ends with closure? I don’t know what closure would look like to me. Even when the show was maybe canceled after Season 2, I was like, ‘Hmm, no one planned for that to be the ending, but what an interesting ending.’”

After the second season finale, I knew that I had to add this show to My Top Shows of All-Time list. I already knew that the Christmas special existed but I had no desire to see it. I felt the same way as Levy. The ending worked as it did. And other than the pivotal “Time After Time” scene in the movie, I felt like they wasted my time. It would have been so much better to see that come at the end of a third and final season. We were robbed of that, but we will always have two seasons of perfect television.

Hate Me and Blame Me