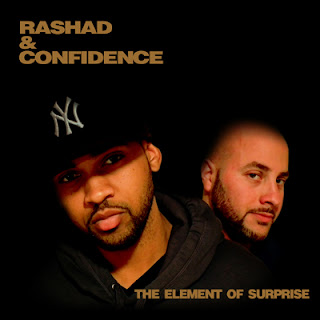 I like to look at the year-end lists many music journalists compile. This was a title that I saw on a few lists so I knew I had to check it out. The album is called “The Element of Surprise” and I must say that it really did surprise me. I’ve been meaning to write about it for months and months now, being that it is one of my most heavily spun albums this year.

This is a solid album that hearkens back to the boom-bap era of the early 1990s. It is a one producer / one emcee project along the lines of Gangstarr or Pete Rock and CL Smooth. Confidence provides the sonic landscapes for Rashad to rap over.

I love sample-based hip-hop and this record really bumps. I also like the lyrical content. All in all, it is a solid album that I am glad I discovered. I almost slept on this one and would have missed a great album.