I’ve been a fan of Dan-e-o since the start of his music career back in 1996. It was long overdue to have him on the show.

I normally start off each episode of Word is Bond Rap Radio with a half hour music mix. I picked a bunch of Dan-e-o tunes and songs that he has been featured in to spin. These tunes spanned several years, eras, and projects. Dan-e-o really appreciated my mix! 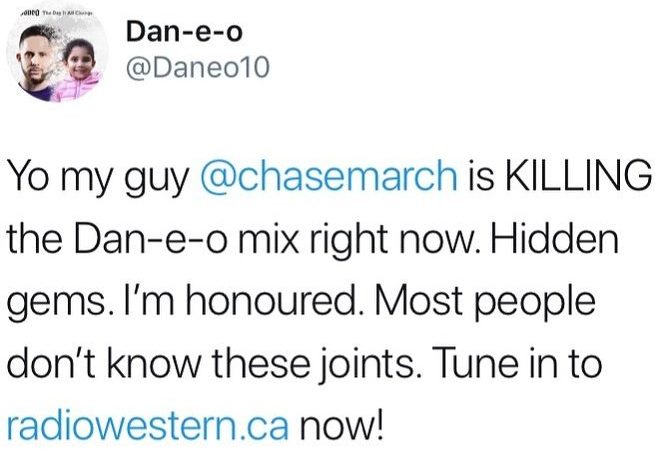 After that, we had a great conversation about the music scene in Canada, how it started to build in the mid 1990s, fatherhood, and played some more songs off his brand new album.

I also paid my respects to Caroll Spinney, who passed away on December 8th. You know him as the voice and puppeteer of Big Bird and Oscar the Grouch from Sesame Street. He did it for 50 years, right up into his 80s. You hear his voice, as those characters, at the start of the show. It was a small tribute to someone who has made a difference in my life and the life of my children. Rest in Peace.

Hip-Hop also lost one of its own this week, JuiceWrld. In an interview he said,

“I talk about stuff like that because those are subjects that people are a) too scared to touch on, or b) don’t do it the right way where people can learn from your mistakes,” he said. “I cherish every mini-second of this life.”

I hope people can learn from his mistakes, because he died at 21. Way too young.

If you liked this episode, you’ll love the last one!

Hip Hop HeadUcatorz present . . . Each One Teach One