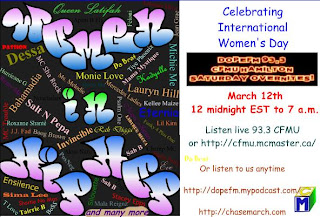 Welcome to this special edition of DOPEfm! I’m really excited to be bringing this to you. Daddy J, Gamma Krush, and I have put together a solid night that is focusing entirely on the Women in Hip-Hop.

This past Tuesday, March 8th, we celebrated the 100th anniversary of International Women’s Day.

Here at DOPEfm we love the females on the mic, the female DJs, and producers, and we love to be able to see that side of hip-hop, that doesn’t always get the recognition and spotlight it deserves.

I interviewed Eternia last year and we talked about this. 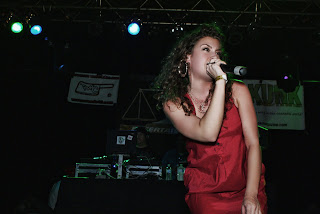 I want to play you a little snippet of that interview right now.

Chase: “I know, personally for me, whenever I hear a female MC, I take extra notice because it’s kind of rare. I don’t know why. Why do you think there is a lack of females in hip-hop?”

Eternia: “I don’t believe that there is actually a lack of females in hip-hop. I think there’s a lack of coverage, oftentimes. I think that getting ourselves out there with multiple full-length albums, there is a lack of that with female MCs. But when it comes to every city, when it comes to every place I go, I find a multitude of females MCs everywhere I go who are doing their thing, holding it down, throwing events, on the radio, and actually doing things that MCs do to promote themselves in every city that I go to. So I know a lot of female MCs globally.

That’s only one issue. Obviously, the acceptance in the culture is, ya know, go to any average American blogsite and I think they just shoot you down before they even listen to you if they hear you’re a chick. It would be much easier to hit the game being faceless and genderless and let people listen to the music and all of a sudden become fans, and then an album in be like, ‘Ha-ha, I’m a chick and you didn’t know. I tricked you! ‘cause I bet they’d listen to it and like it.’ That’s all I have to say.”

Of course, that wasn’t all Eternia had to say. We had an amazing interview, sat down with her for an hour, played some of her music, and had frank discussions about women in hip-hop and about her career. It was very inspiring to talk to her and it really got me thinking about female MCs and why they aren’t heard.

Almost immediately, I started working on a show entirely dedicated to the ladies on the mic. Daddy J thought that we should do the show on International Women’s Day. Gamma Krush jumped on board and put some amazing mixsets together where every single track we are going to play tonight has been blessed by a woman.

We have another great interview to bring to you tonight as well. Sorry, we won’t have time to replay the entire interview with Eternia but if you’d like to listen to it, go to chasemarch.com, click on the “Artist Interview” tab and you can read the transcript of the entire interview and download the podcast for free.

We will have all 7 hours of the March 12th broadcast, plus over an hour of additional content that we couldn’t fit on the air, available by podcast. Every day this week, we will feature a new segment of this DOPEfm special as a free download. So you can listen to this whenever you want.

What an amazing idea for a show. DOPEfm’s tribute for International Women’s Day featuring 7 hours completely dedicated to the Women in Hip-Hop.

It was Eternia that really inspired me to do this show. Shortly after that, I interviewed Shad and he’s got a lyric in his new song “Keep Shining” that simply wouldn’t get out of my head.

“And I’ve been known to talk about women on a track or two
I talk to women, I just can’t talk for women. That’s for you.
We need women for that
More women in rap
Even tracks like Kwali’s Four Women
That’s still only half the view of the world
There’s no girls rapping so we’re only hearing half the truth
What we have to lose? Too much
Half our youth aren’t represented,
the better halves of dudes”

Eternia: “He brings up a really valid point. Ya know how everyone always asks, ‘What do you bring to the game that’s different than anyone else?’ It’s not that I’m female, but I will say that my experiences and my perception and my story is unique. No one else can tell my story.

And of course, we can change that, just being cognizant of what is happening with hip-hop, how’s it’s marketed, and how there are very few female emcees are pushed and given the same kind of promotion that their male counterparts are. It’s a shame that Eternia isn’t as big as Shad.

Everyone knows Shad. Everyone knows Drake. Everyone should know Eternia. She’s an amazing emcee, and she is such a down-to-earth, cool person. Just to know her is to love her. She is amazing.

So, this is what we are doing tonight! We are shining a spotlight on hip-hop’s better half, as Shad would say. We’ve got a lot of great content. I hope you will stayed tuned for all seven hours and if you can’t do that, I hope you will check the podcasts.

What do you have to look forward to tonight? Well, I do a show-within-a-show called Know Your History where I spend 30 minutes diving deep into variety of issues in hip-hop. Tonight, I will be bringing you three brand new episodes of this show. The first installment will focus on the women of the 1970s, and believe it or not, there were quite a lot of females involved in hip-hop since its very inception in the 1970s.

The second episode of Know Your History is going to focus on the Ladies of the 80s and the last episode will focus on two of hip-hop’s biggest and brightest stars; Queen Latifah and MC Lyte.

We also have some amazing mixsets from Gamma Krush. I am also really excited that we will be interviewing Kadyelle. She is an amazing emcee all the way from Australia. I stumbled across the album last year when doing research for this show and I am so glad I did. I absolutely love it. It was my second favourite album of the year.

We will also be playing Dessa, who was my number one album of the year, and Eternia who was also on my Top 10 list. So I had three female MCs on My Top 10 albums of 2010.

So let’s kick this off. It’s time to celebrate International Women’s Day, DOPEfm style. Please download this podcast or stream it with the player below.

See you here tomorrow for more Women in Hip-Hop.

My Favourite Song Last Year at This Time (Day 30)

Hip-hop Ruling at the Junos