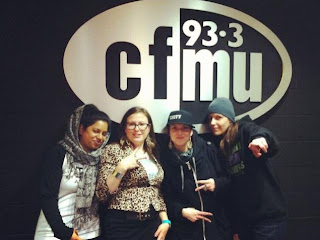 Chase: “All right everybody, Chase March here for DOPEfm. Daddy J is on the boards, Gamma Krush is in the studio, along with a nice panel here, we are celebrating International Women’s Day DOPEfm style.

You can listen to this show with the player below, download the podcast for free,or just continue reading.

Let’s celebrate International Women’s Day with a roundtable discussion group and on the panel today we have Nilla, who is a talented MC. We have Kool Krys, once again, a wicked MC. We have Lady A.S.G., another dope MC, and we have Our Sis Sam, a hip-hop promoter. Welcome to the program everybody.”

Nilla: “Respect, thanks for having us.”
Chase: “We are dedicating our entire overnight programming today to celebrate women in hip-hop. You can listen to the show with the player below, download the podcast for free, or continue reading this transcript. We wanted to bring a panel together to discuss some of the issues involved in rap music and in particular women’s studies issues and see what we can do along that topic today. First question, does anybody on the panel identify themselves as a feminist?”
Our Sis Sam: “I love men, but I’d like to say I am a little bit of a feminist. I’d have to say so.”
Nilla: “I think it’s cool. You don’t have to hate men to be proud of being a woman and that doesn’t necessarily make you a feminist, ya know?”
Kool Krys: “I agree with Nilla. You need to stand for yourself.”
Lady A.S.G: “I don’t think you have to be feminist to believe in women and to have power in yourself. You just need knowledge of self. That’s what it’s about. Definitely.”
Our Sis Sam: “I think coming from an Eastern background though I’ve had to take a stronger stance in claiming that a little more to break ground in that area in my culture.”
Chase: “There is a little bit of a stigma attached to feminism that people don’t want to wear. I’m almost considering myself a feminist these days from what I’ve been doing. I mean, we think we’ve come a long way but especially in rap music but it’s male dominated for some reason. And I know we have some very talented artists here who we spin all the time and I love you ladies. It’s really cool to have you on the program.”
Nilla: “We love you too, Chase.”
Kool Krys: “Woo, Chase. Feminist!”
Chase; “Thanks. I wanted to bring this quote to you. It’s from Murs, another one of my favourite MCs, and he says, “Hip-hop is not a positive environment for a young women. I’d want my daughter fifty miles away from this place, honestly. His quote continues, but I want us to respond to it up to that point. So what do you think about having young girls exposed to rap music?”
Lady A.S.G: “You see, rap is a very broad genre. I guess you see it much more in what people consider the mainstream to be very negative towards women. In the underground, I mean, we’ve got three lady MCs in the house, so what more can I say?”
Nilla: “We have three MCs in the house. ‘A dope MC is a dope MC.’ Krs-One, ya know?”
Chase: “Yes, I definitely agree. But at the same time, I find that there are a lot of people that don’t want to listen to female rap. Case in point, there was a Sean Price video interview and he says, ‘I listen to no female rappers. None!’ The interviewer keep pressing him and he kept saying, ‘None!’ He finally said, ‘Well, MC Lyte. Lyte as a Rock, but that’s the only album.’
Lady A.S.G: “Yeah and only because his wife likes it, right? I saw that clip.”
Nilla: “I also believe it’s Sean Price who won’t do a track with Jean Grae either. I don’t know what it is. Hip-hop is supposed to be about each one – teach one, an inclusive community with everyone supporting one another. At the root of hip-hop, that’s how it started. It started in positivity and as soon as we start excluding people based on their gender we forget why we are all here and why we all vibe or music is good or not or whether or not you listen to someone. You don’t have to like the music but at least respect the art. So to say ‘I don’t listen to any female MCs’ that to me just says that you aren’t trying to grow. You’re not trying to broaden your own focus or your own frame of reference.”
Kool Krys: “Yeah, it’s straight up ignorant if you’re not even considering a music that could change you or inspire you. I think back to when cassette tapes were the way that we consumed music and I would buy a tape being a Wu-Tang 36 Chambers tape wouldn’t sound any different to me than an MC Lyte tape or a Salt ‘N Pepa tape or whatever it was, Paula Abdul at the time.


You didn’t think of it as a woman. You thought of it as music that made you dance, music that made you feel something. And I think that’s the difference. We don’t experience music like we used to. We experience music in a very quick way on the Internet where we can decide just as fast as whether we like a picture or not, when we’re taking digital pictures, I don’t like this. This is a girl, I don’t like this. And depending on who’s in the room, you’re going to have a very different perspective on the music, I think.”
Chase: “I guess it’s just a product of the day and age we live in but that doesn’t change. Good music is good music. To me, it’s colourless and it’s genderless, but it’s not necessarily that way because I know as artists, you’ve probably had a lot of barriers to overcome being female.”
Nilla: “You have to work at least a thousand time harder. At least, just to get on the mic.”
Lady A.S.G: “Maybe two thousand.”
Nilla: “Just to get on the mic. I know from myself a lot of people will be like, ‘Oh you rap. Are you any good?’ and I’ll just say, ‘No’ because that will satisfy their answer and then I’ll go up on stage and do my thing and 90% of the time, those people come back and say, ‘Yo, we gotta do tracks together. Blah, blah, blah.’ But it’s like, ‘How you gonna ask somebody if their good?’ If I wasn’t, would I be dedicating my life to being on a mic and making music and expressing myself in this way?

I didn’t choose this. I didn’t wake up one day, saying, ‘I’m gonna be a rapper and I’m gonna make it really hard for myself. I’m gonna choose a really hard area to break in to.’ No, it’s just the course of my life that brought me to this point. and so I don’t focus on it too hard. I just do what I do and make my music proper. I just work hard. I think that’s the base of any MC, that’s what they’re trying to do, Work hard, gain some respect, but I don’t want any respect from someone who is going to judge me before I even jump up on stage.”

I hope you’ve enjoyed the first portion of the transcript of DOPEfm’s Roundtable discussion for International Women’s Day. You can listen to the entire roundtable with the player below or download it now for free. Please come back tomorrow for Part 2.