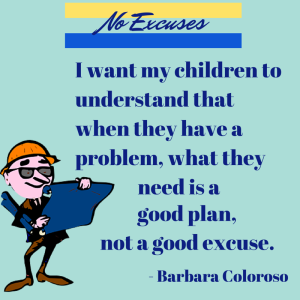 I got a lot out of Barbara Coloroso’s book, Kids Are Worth It. I took pages and pages of notes when I read it. The book is now full of underlines and margin notes.

I never used to be able to write in my books. I didn’t want to mess them up. I wanted them to be in mint condition even after having read them. But having a nice looking book isn’t as important as having one that speaks to you and one you can interact with. So, I recommend making underline notes in pencil (you could always erase them later.)

It is important, that as teachers and parents we model working through problems the same way and take responsibility for our actions. These seven steps are quite handy and I am going to post them in my classroom.

Admit the Mistake and Take Responsibility

Coloroso uses the term “backbone parent” to show the contrast between two other parenting styles that are not effective. In the quote below she illustrates how backbone parents would handle making a mistake. It’s how I want my students to handle them to, so I altered the beginning a bit.

I want my children to understand that when they have a problem, what they need is a good plan, not a good excuse.

Here are another set of steps worth posting up.

Remember you are helping her learn how to think—not what to think.

The Game and The Sit

When two students have a problem with each other, there is no way a teacher can solve it. The problem often will spill out into the yard and become a fight or it will spark up again on the bus. Giving the students time to own the problem and figure it out is the best solution. I’ll admit that this particular method would be difficult in a classroom, but it is still worth considering.

“You both seem really angry. Come over here and sit together on the couch. You can both get up as soon as you give each other permission to get up. What is it you need to do?”

Asking this question is very important and good teaching practice before sending students off on any task.

Neither can move. They both have the power over the other, but that power is connected to the other person’s power. Kids begin to see that they are not dependent or independent but truly interdependent—not controlled or controlling but rather influencing and influenced. Soon one says,

“You can get up.”
“But I’m not going to let you get up.”
“You may both get up as soon as you give each other permission to get up”

Finally they get the message that together they have the power to control the situation. Notice that they haven’t been punished. The goal is not to punish them. It is to discipline them.

I still have more notes I can share with you about this book. And I picked up another Coloroso book at a used book sale last week, so I’ll probably have even more tips from her next year in this series.

Each1 Teach1 Getting Radio Spins

When Will I Ever Use This Stuff?