I fell a little behind on my reading log for 2013. So for the rest of the week, I will be catching up on blogging about those books I finished off the year with. 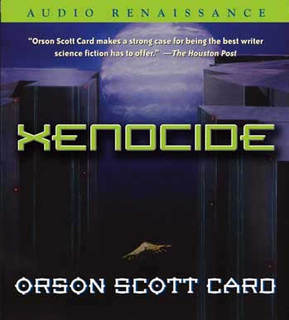 I love Ender’s Game. It’s one of the best books I’ve ever read and the sequel, Speaker for the Dead, is even better. That rarely happens.

I’ve read a prequel, a few graphic novels, and the first book of the Ender’s Shadow series. I don’t know what took me so long to get around to reading the third book of the original series. Truth be told, I didn’t even read this one. I listened to it instead.

The audio book series is so well done that it is my preferred way to experience these stories. The books are produced with full cast narration, music, and sound effects. They are absolutely stunning.

In the afterward, the author states that he only ever planned to write two books about Ender WIggin. His publisher sold the trilogy though and that sparked an entire series that now spans 16 novels, several graphic novels, and a feature film.

This book wasn’t nearly as good as some of the other Enderverse books I’ve read though. I found it to be a little slow. That being said, I still enjoyed it and look forward to reading further into the series.