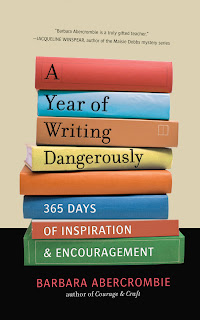 Chase: “All right everybody, this is Chase March and I have Barbara Abercrombie on the phone, author of A Year of Writing Dangerously:365 Days of Inspiration and Encouragement.

Download the podcast of this interview for free, stream it with the player below, or keep reading the transcript.

I think this is a book that a lot of writers will be able to enjoy. You’ve broken it down so there is an entry for every single day of the year. They are vignettes or advice and things for writers. So how did you go about compiling this?”

Barbara: “I got the title first and I loved the title, and then I didn’t know exactly how I was going to do it. A friend of mine, who is a writer, who has published a number of books said, ‘You’ve got to do it day by day. I’d buy a book that had something day by day.’

It took me a while to find the voice for it. This is my fourteenth book and every book I write, it’s always a struggle – How are you going to tell the story? What voice are you gonna write it in? And it was just fun because I’m a literary groupie really, and there are a lot of anecdotes of writers in the book. And so I just sat in my office and read memoir and read biographies of writers. Then I used a lot of my own experiences too as a writer.

Chase: “That’s pretty cool how you were talking about finding voice because there is an entry in there, # 8 The Voice that Chirps and Chips and that talks about the negative voices, and I’m sure all writers have this, and even people in their regular lives. The quote reads, ‘We’re so good with negative voices: You idiot, what kind of an idea is that? Who do you think you are to be writing a book?’ The thought goes on that you can actually not listen to those voices.

Which reminds me of another book I just read, Maestro’s Stick to Your Vision. He’s a rapper from Canada here and he talked about how you could trick your brain. Every time you have one of those negative thoughts, you can replace it with a positive though, then you are tricking your mind by deleting the negative thoughts and inserting the positive thoughts. He said that you don’t even have to believe them, just as long as you do that, you will start to believe them and ‘Boom, you’ve tricked your mind.’

Barbara: “I think that’s really true. I really do, or you just tell yourself to do the work. Do the work, don’t judge yourself, write, and once you get into the writing, that’s the way to get that voice to shut up. I think everybody has a negative voice on their shoulder that kicks in every once in a while. The trick is, of course, to shut it up and to replace it with a sweetheart voice that says, ‘Just do the work. It’s okay. Keep going.’”
Chase: “Which reminds me of Day 11 in A Year of Writing Dangerously. “… you don’t have to ‘like’ your own writing. You don’t have to be calm and self-assured. In fact, it’s better if you’re not. It keeps you honest.” I think that is what holds some people back. They’re afraid that their writing isn’t good enough, but as long as you do the work, then you can try to put that thought aside.”
Barbara: “You know, it’s impossible to judge your own work in the middle of it. Fortunately, I don’t know too many people who just love their own work. They just do it because I think they are insufferable probably. But you are struggling to create something. It’s a work in progress and it’s hard to write. You just can’t judge it.
I also say, ‘Put it away. Don’t ever throw it out! Put it away, come back to it and you’ll find something in it.’ I also tell my students, ‘Whatever you write is important because maybe it’s not what is gonna stay on the page but by going through your writing, you are getting to what you need to write and will write eventually.’’


Please come back tomorrow to read the conclusion on this transcript. In the meantime, download the podcast for free or stream it with the player below.