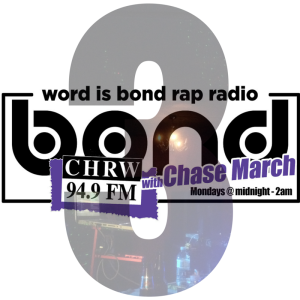 We kicked off the program with a mixset by Teck-Zilla of The Word is Bond. He spun a bunch of “Word is Bond” songs.

Next up, Relic called in to send some warm wishes on us reaching this milestone and we did a little interview with him.

Relic – Thru the Motions

After that, Daddy J from DOPEfm jumped on the decks to deliver us a nice mixset that repped Steel City!

And then we blew the roof off the studio with some fantastic live performances.

I spun a mixset highlighting two of my all-time favourite acts: 2Pac and Run-DMC.

And then, we had a few legends on the phone lines.

Masta Ace, Wordsworth, and Stricklin on the phone lines

These in-studio performances were stellar!

Es – Speak Up, Speak Out
Lyrical Mind – Baby So Crazy

And then we capped things off with mixset by DJ Wiskaz

And closed off the show with a cypher!

Thanks for tuning in these past three years! Here’s to the next 3!

Scratching with The Champ

Putting Graffiti In Its Place