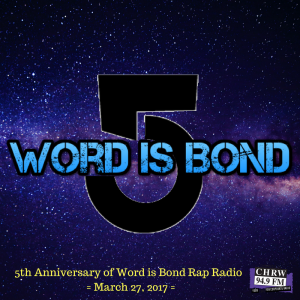 I started Word is Bond Rap Radio five years ago. The tagline of the show has always been “real hip-hop music and talk” and I have been happy to share some of my favourite music with you week in and week out for the past 250 episodes.

And of course, I have had countless local artists, upcoming talent, and independent artists on the show. I’ve produced dozens of documentaries on hip-hop music and culture, celebrated the Women in Hip-Hop every year for International Women’s Day, and had guest deejays providing mixsets.

It’s been an absolute blast bringing you this show every week. I’m looking forward to the show tomorrow night. We have big things planned to mark this anniversary. We will have live guests, a cypher, some trivia, and of course, great music mixed live by yours truly.

Tune in tomorrow night to 94.9 CHRW to catch it all live. It starts at midnight and goes straight through to 2:00 a.m.

The original broadcast is now available to stream or download with the player below.