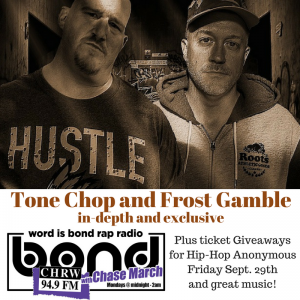 Tone Chop and Frost Gamble call into Word is Bond Rap Radio to talk about their new album “Respect is Earned Not Given” and premiere some of the tracks. The project drops on Friday, so if you like what you hear, go cop it.

We also are giving away tickets to Hip-Hop Anonymous in London, ON. Canada on Friday. To win, simply like our Facebook page and share the event page and a podcast post for your chance to win. The winner will be announced Wednesday. Good luck!

Enter Our Ticket Give Away – London, Ontario, Canada show (via Facebook)

Hip-Hop History Month is Every Month

My Infamous Beatbox Routine (A Blast from the Past)