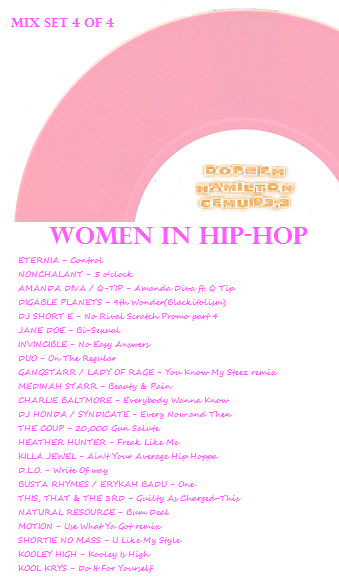 I hope you’ve enjoyed DOPEfm’s tribute to the Women in Hip-Hop.

You can download this final mix set for free, or stream it with the player below.

Daddy J, Gamma Krush, and I put a lot of effort into this show. We compiled eight hours of quality radio to help celebrate the 100th anniversary of International Women’s Day.

Women have been actively involved in hip-hop since its very humble beginnings in the 1970s. That is something that often gets overlooked. It really shouldn’t.

We need to hear female voices in this male dominated genre, otherwise we are really only getting half of the story.

I think it is disrespectful to put women rappers in a different category than their male counterparts. This happens all the time. Case in point is the term “femcee” that is now often used. This term combines MC with the word “female” to call attention to gender.

However, an MC is an MC and the sex of that performer does not need to be distinguished with a term. Quite frankly, good music is good music whether it comes from a male or a female. That is why “femcee” is not a term that you will ever hear us use here at Silent Cacophony or at DOPEfm.

Kadyelle had a lot of great things to say on this topic during our exclusive interview with her. She said,

“I also think the general consensus to hold females to a far lower standard than males is also a part of it. Women don’t aspire to be greater that what they possibly could be because they are expected to be bad, I think, to be honest.

It’s a shame that I am constantly being told that if I want to be out there touring and putting out releases that I just have to accept it. It’s the kind of criticism that you get that not a single person will comment on your songs, they’ll comment on the fact that your skirt maybe isn’t short enough, or your top isn’t low-cut enough, or maybe there is another female rapper out there that happens to be skinnier than you or hotter than you. It’s pretty ridiculous.

I don’t know why there’s so much tolerance for that kind of behaviour in hip-hop culture. I don’t know why it exists. It’s a shame and I hope over the next decade or two we see the last of that. It’s a ridiculous, out-dated situation that really needs to end if people want to see more females in the industry be successful.”

Wise words from an amazingly talented artist and songwriter. If you missed the Kadyelle interview, please do yourself a favour and read, stream, or download it now.

The player below will give you a stream of the final mix set that Gamma Krush did for the show last week. He put together over four hours of tracks with each and every song blessed by either a woman deejay, rapper, or producer.

I still have three episodes of Know Your History to bring to you as well, so if you’ve enjoyed what you have heard so far, please stay tuned to this blog for more over the next few weeks.

You can download this mix set for free or stream it with the player below. And don’t forget to go back and download the other three mix sets as well.