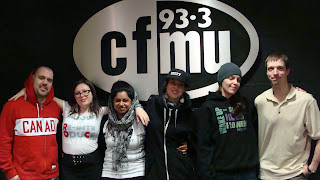 Chase: “You are listening to DOPEfm’s annual International Women’s Day special. It’s actually the 101st anniversary of this day, so that is something right there.

Download the podcast for free or stream it with the player below. You can go back and read the transcript from the start or just pick it up here. Either way, enjoy and let us know what you think of the program.

We try to celebrate women each and every week with what we do here at DOPEfm but we are especially proud to bring this special to you every year, by dedicating our entire overnight to the Women in Hip-Hop. That is what we are doing on this panel.”

Gamma Krush: “It’s not really so much that we celebrate women, we just celebrate hip-hop and women and Polish people and Scottish people. All sorts of races, represented.”

Chase: “For sure, one of the things I like about hip-hop is that it’s so inclusive. Anyone who has the talent and desire can do something in hip-hop whether it’s in front of the mic, behind the boards, on the turntable, promoting shows. It doesn’t matter what colour you are, what gender you are, how old you are. None of that matters, and that’s one of the things I love about hip-hop and what’s always drawn me to it.”

Nilla: “It’s definitely universal. It’s the only universal language. You might rap in a different language and I might not know that language but you and I both recognize that beat and that beat is our heartbeat. I’m a gypsy and I run this country left to right, east to west, and hip-hop is truly my home, so wherever I go, that’s where I feel at home, in hip-hop communities. Whether or not people want to respect you from wherever you come from. I’d like to say that it really is that inclusive, but I think there are people out there who want to make it really exclusive and particular to one kind of people or one way of people and I think we should just broaden the scope.”

Chase: “Let’s get heavy for a moment.”

Nilla: “We haven’t been heavy yet?”

Kool Krys: “That was just a warm-up. Bring it!”

Chase: “I wanted to discuss the violent nature of hip-hop and whether or not that keeps women away from creating this music. I also want to address domestic violence and how we can get that message out to the youth that this stuff happens and that it’s not okay and maybe even tie that into what’s going on with Chris Brown and Rihanna right now. I think it’s a topic that we should address, the fact that maybe they are getting back together, the fact that they were on the same Grammy stage, the fact that they are collaborating on new songs together. I know domestic violence is crazy but maybe that is something we can touch on here.”

Our Sis Sam: “I think one of the most disturbing things about the whole Chris Brown / Rihanna thing is that I saw a whole bunch of posts that young girls had been making saying, ‘Chris Brown can beat me anytime he likes,’ and ‘I’ll be your punching bag.’ I was absolutely mortified and disgusted. These are young girls and I think about how far we’ve come and you far we’ve fought and think ‘You’re really going to take us back there, really?’ What are you learning in this modern day education system? What are you learning? Where is your motivation and self-esteem? What is happening in your family unit and in your immediate cipher that you have lost your self-esteem, self-worth, and self-respect that you would allow yourself to be treated like that? It made me sick.”

Lady A.S.G: “One thing that you brought up is how society is right now. We are brought up to look at women a certain way, to look at men a certain way. We have our roles. I get it all the time, stuff like, ‘You belong in the kitchen.’ I hate that. I can’t stand that. I get things like, ‘You should be cleaning and making dinner for me. What the hell are you doing on stage?’ Really, you just went there? So I just try and go do my thing and prove them wrong. Can you rock the mic like I can, you know what I mean?

You don’t have to follow what everyone else does, what society tells you to, just because you are taught in school a different way, or what you see on TV. Nowadays both parents are working so usually they are sitting themselves in front of the TV or the babysitter doesn’t care enough to read books with them or take them outside and then they learn these ways, like how to treat women in a very disrespectful manner because they are emulating what they experience in their live. And unfortunately, part of their lives is TV shows like Family Guy, or The Simpsons, or-”

Our Sis Sam: “This is exactly why I haven’t had a TV in my house for ten years.”

Back to the Chris Brown / Rihanna thing. I was reflecting on this recently with my teammates and was thinking. ‘Well, if they’re taking the high road and they are trying to show that people can overcome, they can grow, they can forgive, they can go into their anger management.”

Nilla: “Which is very important that they can do this. Now obviously their PR teams are showing them united on that front but they’re not doing the background work, so all I’m seeing is on a real level the industry is saying, ‘It’s all right that he beat the crap out of her and everyone saw those pictures’ and three years later they go and do tracks together and they might get back together. I worry for Rihanna, same way. This girl might have lost herself, maybe we need to go hang out with her, you know, show her a warmer way. Unhealthy love is unhealthy love.”

Our Sis Sam: “And as far as domestic violence in hip-hop, I had a sister when I was in high school who was in an abusive relationship and it was really close to home and one track that had just come out around that time was by Eve.”

Gamma Krush: “Love is Blind. That’s the chorus at least.”

Our Sis Sam: “She had a really great video with that track as well. It was so important for me to have that song in my life at that time, and I think it’s really important that hip-hop touches on topics that are prevalent in our lives. Clearly, it’s an issue that young girls are still feeling that they deserve to be victimized like that. It’s important that tracks like that are being made and it’s important that MCs are using their power to address issues like that rather than talking about superficial things are are addressing real and relevant to their listeners

Kool Krys: “Eternia, our star MC from Canada, much respect to Eternia. She speaks to some really emotional issues that women and men can relate to. I really respect her for that because it must be really difficult to be that self-revealing on many levels, but she’s really able to engage people who’ve experienced similar situations.”

Nilla: “What’s that last track she did where she’s talking about her abortions.”

Kool Krys: “That takes a lot of courage to do a song like that. I think that if other female MCs have a story like that within them, they should feel compelled to share it because it really speaks volumes to other people.”

Nilla: “That’s the hard part too, exposing yourself and being open, but that’s the thing that also binds us. I know when I did my Night Phoenix E.P. it was all about a break-up. You basically see my whole break up, front to back. I definitely put him on blast. It made me feel better. Through me being so open and so raw with it, I had a lot of people come back to me and be like, ‘Yo, you really helped me though a time,’ which I didn’t expect.

And hearing Eternia’s track, that took serious courage, and she did it in a powerful way, and hopefully, maybe, Rihanna and Chris Brown can do a track like that.”

Chris Brown does not seem repentant to me at all, tweeting ‘To all my haters, I got a f*cking Grammy.’ He tweeted something like that instead of ‘You know what, I’m sorry that I let you guys down. Thanks for the Grammy.’ He could have said something like that and humbled himself a bit. They are both pop artists and I’m not sure pop radio is going to want to hear that heavy of a track.”

Nilla: “Rihanna is not new with it though. Tina Turner was severely beaten her whole career and she’s still representative of a very dominant force within her genre and her industry.”

Chase: “Let’s go back to the very beginning of hip-hop for a second. We need to remember that hip-hop didn’t start as a recorded music business and that there were some women pioneers and party promoters in those early days of hip-hop.”

Our Sis Sam: “I’ve watched a lot of old school hip-hop documentaries and I remember one of the early breakers or scratch deejays said, ‘Everyone was giving me this rep of putting on all these shows and killing these parties but the one who really made it all happen was my sister. She was the one who was behind the scenes, throwing the parties, and organizing everything.’

Like I was saying before, whether we are in the front lines or behind the scenes, we tend to be the brains behind a lot of things or giving some direction or being the support and the man-power behind things and it’s still true today. We are coming more in to the front line in any aspect of society and women have always played a critical role whether they’ve gotten their shine on that or not. It’s a matter of recognizing everybody’s strengths that we’re involved in making any sort of evolution happen in any sort of group or subculture.”

Nilla: “But the winners always write the history.”

Chase: “You’re listening to DOPEfm’s International Women’s Day Roundtable discussion. Daddy J is on the boards, Gamma Krush is in the studio, this is Chase March, and we have a lot of lovely ladies in the house tonight. And yes, we’ll be getting back to the music soon. Gamma Krush has some dope mixsets coming up, but we still have a few things to discuss. Come back tomorrow to read the rest of this transcript, and don’t forget to download the podcast or stream it with the player below. Thanks for tuning in. Let us know what you think about the program.”