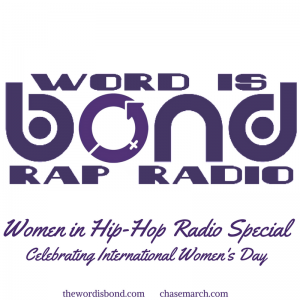 Every year for International Women’s Day we shine a spotlight on hip-hop’s better half by dedicating the overnight’s worth of radio programming to the Women in Hip-Hop.

This is the third and final podcast episode for Women in Hip-Hop 8 and it features . . .

The third year rap music was recorded, we had some amazing female voices on record. Here are some of them and a little bit of history behind them.

Local emcee, TJ Edwards walks us through some of his favourite joints from the women in hip-hop featuring . . .

And I close things off with a mixset to bring the 8th annual women in hip-hop spectacular to a close.

If you liked this show make sure to check out the full Women in Hip-Hop 8 Spectacular.