Winterlude is an annual event where Canadians get together to celebrate Winter.

I know a lot of people would rather huddle up inside and hide under the covers just waiting for it to be over. “Who celebrates winter?” they say.

That being said, I’ve always heard good things about Winterlude so this year I made my way up to Ottawa to check it out.

The celebrations kicked off Friday night with a spectacular fireworks display. 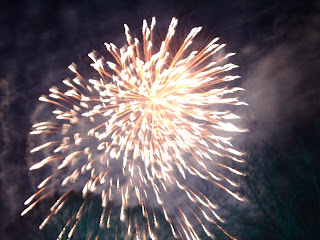 I went into Quebec to the Canadian Museum of Civilization to see the musical display.

I don’t think I’ve seen a better fireworks demonstration in my entire life. It started with what you normally expect of the grand finale. The pacing of the fireworks was amazing. It let up a little in the middle of the show and the music slowed down in perfect syncopation.

The bridge was entirely lit up and at one point, it looked like it became a waterfall as the fireworks arced off of the bridge. It was cool to see the fire extinguishing as it hit the ice below. 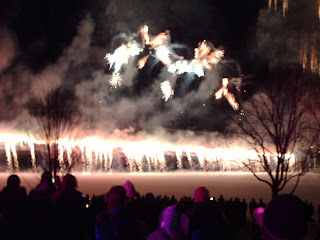 After the fireworks, a DJ Misstress Barbara played some energetic records to get everyone to dance and warm up.

It was a pretty nice welcome to Canada’s capital region. I spent the rest of the weekend enjoying the other attractions that Winterlude had to offer and will be blogging about them later this week.

8 Comments on Winterlude Lights Up the Night