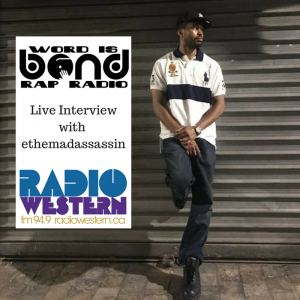 This week on Word is Bond Rap Radio, we kick off the show with thirty minutes of battle rhymes and dis tracks. Sometimes names just need to be called out.

After that, we have an exclusive interview with ethemadassassin.

And as usual, we bring you two hours of great hip-hop music and talk.

If you listen to the show live, we are moving time slots. Catch us two hours early and one day later. We are now live Tuesdays from 10:00 p.m. to 12:00 midnight on 94.9 CHRW Radio Western.