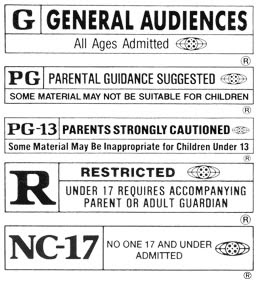 Movies have very easy to understand ratings attached to them. These ratings are there for a reason.

Call me an old prude if you want to but I think that there is just some material that children do not need to see. I know that there are some scenes in movies that even I don’t want to see.

That is why I find it so disturbing to hear what a lot of kids are watching at home these days. I regularly hear that students in Grades 2, 3, and 4 are watching horror movies such as Saw IV, sex comedies such as SuperBad, and other violent films that they probably shouldn’t be watching.

About four years ago, I was supplying in a Kindergarten classroom. These students were 4 and 5-years olds. One student was telling his friends “how cool” a scene was in Kill Bill. He then went on to describe, in detail, a scene where someone plucks out someone else’s eye in a fight scene. This was coming from a 4-year old. I couldn’t believe it.

I have seen this inappropriate talk and action from elementary students every year since then. Kids as young as four years old are reenacting and retelling scenes from movies. I find it disgusting.

I don’t know why parents are letting their children see these movies. I wish that these rating were a bit tougher. Perhaps we should make it illegal for children to see restricted movies. That way, as a teacher, I would have recourse to act on this. As of now, I can’t really do anything about my students watching inappropriate movies.

I don’t think it is cool. Not one bit. But these kids get reinforced by their friends and they seem to be given free reign at home. Am I the only one that sees this as a problem?

I just wish parents would use some common sense. Let children stay children for as long as they can. Let’s protect them from violent imagery, mature subject matter, and inappropriate material.

What do you think? Please leave a comment and join this discussion. Thanks.