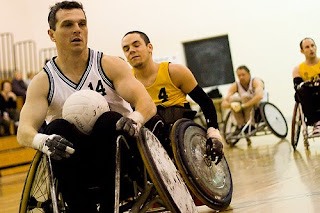 The Winter Olympics energized the community and had Londoners feeling pride at the accomplishments of our amazing athletic heroes. We wanted to welcome them home with a huge celebration in February but unfortunately things couldn’t quite come together then. The athletes had commitments and continued to remain busy for weeks afterwards. However, we finally had the chance to get them all together and honour them last month at the John Labatt Centre.
The city of London decided to honour our summer and paralympic athletes at the event as well. It was great to see the outpouring of support the community showed. The arena was packed full of fans sporting red and white. The crowd was energetic and loud as we honoured our local heroes.
I had the chance to talk with David Willsie, co-captain of The Canadian National Wheelchair Rugby team. He’s been to three paralympic games and was featured in the Oscar-nominated documentary Murderball. He has a long list of athletic accomplishments and when I pointed this out to him, he simply said, “I’ve been fortunate enough to play on a lot of good teams.” He then added, “Winning is a lot better than losing.”
Most people would never consider playing such a violent sport as rugby, let alone doing so in a wheelchair. Willsie, however loves it. “The original concept of our sport was called murderball and we actually switched it to wheelchair rugby to make it a little more sane, I guess. Most of us, we broke out necks doing something a little crazy anyways so we just transformed that after our accidents and started hitting each other with wheelchairs.”
Willsie is known to trash talk on the court but there was no sign of that at all at the community celebration last month. He was blown away by all the support. “It was amazing. The energy, you could just feel it. And to see the kids’ faces when you’re going around. It’s unbelievable because training is boring and stuff like this really pushes you through.”
Willsie talked to fans and signed autographs for some time after the event. I called him an inspiration but he bounced the praise right back to the fans. “Some days you don’t want to train, ya know, the weather is crappy, you don’t want to load up the chair and get it all set up. You just remember those kids, you give yourself a little kick and go back out there and do it.”
Willsie really appreciated the event. It was clear that he was enjoying the attention and the support of the crowd and the kids who waited patiently for a moment of his time. “I’m having a blast!” said Willsie. “I know I’m getting more out of it than the kids are.”
The community has stood behind him for a long time. He’s been competing on the Canadian National Team since 1999 when the team took home a third place finish. David Willsie has a resume full of gold, silver, and bronze medals. He took home silver at the 2004 Paralympic Games in Athens, Greece and bronze in the 2008 games in Beijing.
His training schedule is pretty intensive as well. “I do a lot of wind-sprints and cardio training in my sports chair. I’ll do that five days a week, long distance cardio a couple days a week, and then some guys hit the weights a lot harder than other guys.”
He also wanted to thank Lord Dorchester High School for the use of their gymnasium. He trains there nearly every day. “That’s just the community getting behind you.” He also added that London hosts The Clash for Cash, which he calls “the best spectator club rugby event that’s going.” It’s clear that David Willsie is proud to be from London and really gets energized by the support of the community.

The Canadian team is going into the 2010 World Championship in Richmond, BC ranked third but Willsie believes they are better than that. “We got one World Championship ring. We’re going to get another one in September.” Big words indeed but he’s proven he can back up those words on the court, time and time again. London will be cheering him on and with that energy behind him, he is sure to help his team win another medal.

You can download the radio interview I did David Willsie for free or stream it with the player below.