I was really surprised to read about the history of banks. I’d always felt like something was terribly wrong with how they operated, but I never really looked into it until I read this book. 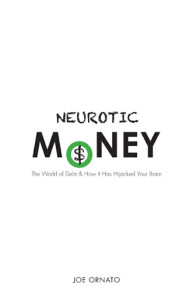 Neurotic Money: The World of Debt and How It Has Hijacked Your Brain by Joe Ornato

“After a while, the goldsmith built a good reputation for keeping people’s gold safe but realized that only a few of his clients would actually come and demand to take out their gold at any one time. Rather than lugging around several hundred ounces of gold in their pockets, the goldsmith offered his customers slips of paper indicating the value of the gold they had stored in his vault. Customers, knowing that they could retrieve their gold at anytime, would make up IOU slips and trade them with each other . . . the IOUs became just as valuable as the gold.”

Until I read this quote,

“It should be noted that the lending out of gold that did not belong to them was not ethical or even legal, but the human trait of greed superseded honesty and integrity!”

I knew that banks were unethical in their operating practices, but I really had no idea how deeply that went.

“IOUs were guaranteed by gold reserves held by the goldsmith. . . the goldsmith based his system of redemption on statistical evidence and chance. The goldsmith’s success depended on the principle that not everyone needed their money at the same time, so he would lend out more IOUs than he had gold on deposit.”

Banks lend out money that they don’t even have?

“the paper money they were given by their bank was based on gold that potentially didn’t exist.”

So paper money grew out of the success early goldsmiths had with IOU slips. Interesting!

“Now dollars were ‘legal tender,’ which meant that one dollar was worth another dollar because the government says so! Declaration-based money, or fiat money, was created.”

I had no idea how money was pretty much created from nothing based on the process of lending and borrowing.

“The most common fractional reserve ratio that the banks used was 10%, so for every $10 a bank had in deposits, they could lend out $9, 90% in credit.”

What? They only need to keep a dollar in the bank for every ten?

But if you dig deeper, the numbers get even more absurd and unbelievable.

For example. if you “deposit $10,000 – they can lend out $9,000. You take that $9,000 and buy something and the vendor deposits it at another bank so it can now lend out $8,100 in credit. The cycle continues. In this case, we have created $27,100 in new money from the initial $10,000 deposit, yet the amount of real money in the system was really only $10,000! As long as the 10% reserve was accounted for, our banks could lend 90% of the deposit to another, even if the original deposit came from money borrowed. Essentially, one’s debt becomes another’s deposit!”

I wish I could do that with my money. Tripling it with pretty much no effort. That’s ridiculous!

I guess I always knew that the money the banks had in their vaults was really our, the public’s money, but I had no idea that a vast majority of this money didn’t even really exist.

“most of the money that banks account for as an asset, was at one time or another borrowed from somewhere else.”

Understanding how money works is the first step in getting a better control over our personal finances. Joe Ornato has advice on how to do just that in this book. I am going to follow some of that advice. Hopefully, one day, I will be in a more comfortable position financially.