One of the most frustrating things about Twitter is trying to have a conversation with someone.

When you reply to a tweet, it isn’t threaded at all. There is no subject heading so it can often be unclear as to what post you are commenting on.

I know there have been times when I’ve stared at my @replies and had to decipher what it was this person was trying to say to me. I’ve had to scroll back through my tweets to see what I said and which particular thought started the discussion.

Well today, I came up with a way to thread a conversation so that my readers will be able to follow it without confusion.

I’ll show you what I did. 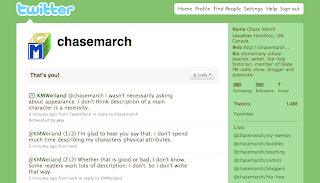 As you can see. The original tweet is at the top of my Twitter page and my two part reply is directly below it. This was any of my followers will be able follow the entire discussion quickly and easily.

The first thing I need to explain here is how use multiple tweets to get a point across because sometimes 140 characters is simply not enough.

Simply type the entire message you want to post. Twitter automatically does the counting for you and even tells you how many characters you have gone over. Then split the message into two parts and number them (1/2 – means that this is message 1 of 2)

The trick here is to post the last message first. Do this by highlighting the first tweet (1/2) and copying the text (Control C)

Now on your Twitter page, people will be able to scroll down and read your message in the right order.

The next thing to do is to go and retweet the original message to which you are replying to.

I can’t believe I didn’t think of this earlier. It solves the problem about threaded discussions in Twitter for not only myself but for all of my readers as well.

I hope you found this tip useful and I hope to have some discussions with you either here in the comments of on Twitter.