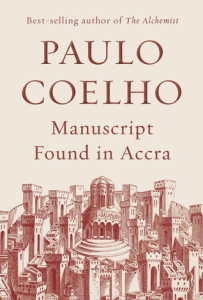 Words have power. They have the power to inspire, to educate, to entertain, and they even have a calming quality that can make a anxious time more bearable.

Perhaps that is why a group of people gathered around an elder back in the year 1099 as their city was being invaded and attacked. Fortunately for us, someone wrote down his words and they happened to survive all this time.

Here is some knowledge from the Manuscript Found in Accra.

Focus on Your Goal

“He focuses not just on the goal to be reached, but on everything happening around him. He often has to stop because his strength fails him. At such moments, Love appears and says: “You think you’re heading toward a specific point, but the whole justification for the goal’s existence lies in your love for it. Rest a little, but as soon as you can, get up and carry on. Because ever since your goal found out that you were traveling toward it, it has been running to meet you.”

Pour in the Love

“This second type of work we call the Offering. For example, two people might be cooking the same meal and using exactly the same ingredients, but one is pouring Love into what he does and the other is merely trying to fill his belly. The result will be completely different, even though Love is not something that can be seen or weighed. The person making the Offering is always rewarded. The more he shares out his affection, the more his affection grows.”

“Don’t try to be useful. Try to be yourself; that is enough, and that makes all the difference. Walk neither faster nor slower than your own soul, because it is your soul that will teach you the usefulness of each step you take.”

“And what is simplicity? It is the coming together of the true values of life. Snow is pretty because it has only one color. The sea is pretty because it appears to be a flat plane. The desert is beautiful because it seems to consist only of sand and rocks. However, when we look more closely at each of these things, we discover how profound and complete they are, and recognize their qualities. The simplest things in life are the most extraordinary. Let them reveal themselves.”

This book is a work of fiction but it reads like a self-help book or even a religious text. It get into some topics that Holy books usually don’t, but the openness and honesty of the elder’s words ring just as true.

I have enjoyed every Paulo Coelho book that I have ever read and highly recommend The Alchemist by him as well.

The Governor is a Monster