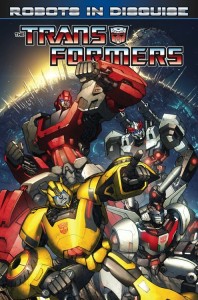 Robots in Disguise in an on-going comic book series that picks up right where the television show Transformers: Prime finished off. If you have never seen that show though or read the previous comic book series, don’t fret. This is a great read and shows just what is possible in the Transformers Universe. The storytelling is brilliant, the characters are well-developed, and the art is amazing. It is exactly what I want from a Transformers comic.

The story is set on the newly restored home world of Cybertron. Transformers from all over the universe are returning home to find a brand new government, one that is lead by Bumblebee. It is supposed to be a non-partisan group. It is neither Autobot or Decepticon and is meant to serve both as well as any NAILS(Non-Aligned Indigenous Life-forms)

In the absence of Optimus Prime, Bumblebee does his best to try and unify the robots in peace but has his work cut out for him. Certain Autobots and Decepticons still have a mistrust of each other and would like to return to the old ways of warfare when things were more black and white. Ushering in a new golden age is certainly going to be a challenge. 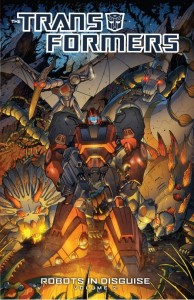 Optimus Prime resigned as leader of the Autobots prior to this series starting and now goes by Orion Pax. He left Bumblebee in charge of governing the homeworld to go on a mission to capture one of the most evil Decepticons, Shockwave. Meanwhile on Cybertron, the Dinobots are back and tensions are still high as Bumblebee tries his best to make the new government work. 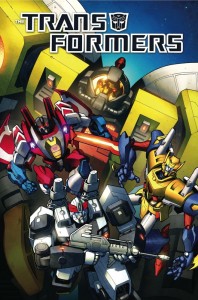 Optimus Prime continues his mission to track down the rogue Decepticon but uncovers an ever greater mystery. Meanwhile on Cybertron, Metrotitan arrives back home and discovers an ancient buried city. Starscream also starts working with the new government. 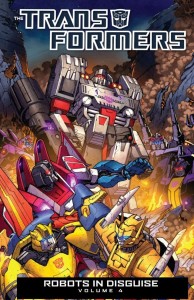 Megatron is back and intent on destroying the peaceful alliance that Bumblebee and Starscream have been working to achieve. 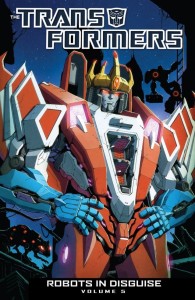 We find out some of the origin story of Shockwave in this volume. This backstory was really cool. It explains why he looks different than other Decepticons and why he is so cunning and determined. It also shows how he has been the kingpin of the story so far.

I look forward to reading the next two trade paperbacks of this title and the Dark Cybertron series it leads in to.

2015 Reads – My Constantly Updated Reading Log for the Year

Lightning Strikes Twice for The Flash

Too Many Things, a Doom, and Finally a Daredevil