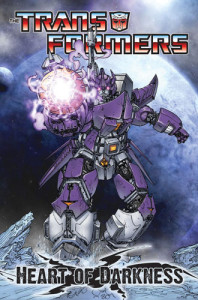 Galvatron in back and it looks like the on-going series has taken steps towards the second generation. I much admit that I have always preferred Generation One Transformers and I missed having Optimus Prime and Megatron in this issue.

I didn’t have to worry though, the Generation One characters are still alive and well and interact with the newer characters in the rest of this arc. 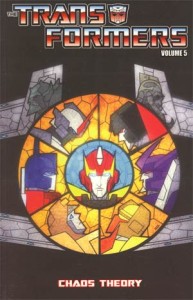 We see biological aliens in this issue. That’s not something we see often in the Transformers universe.

Rodimus has survived and keeps the Matrix of leadership safe from aliens who want to harness its power. He makes it back to Earth and Optimus Prime is reunited with the Matrix. 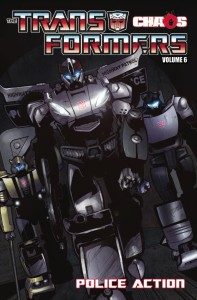 This issue takes place completely on Earth. Spike is accused of murdering a Decepticon. Political tension is high as the Autobots try to figure out what really happened. 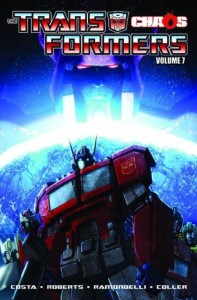 I had no idea that the on-going Transformers series was coming to an end with this trade paperback.

The big battle has arrived. Galvatron is really close to opening a portal that would unleash a terrible darkness into the world. The Decepticons become mere pawns in this battle and it looks like things are very bleak for Optimus Prime, the Autobots, Cybertron, and the entire universe.

Two new on-going series continue the Transformer story. I have yet to read these titles, but I understand that they are really good. A fellow blogger on Tumblr has told me they are even better than the series I just finished reading. That’s good to hear, because these last four issues weren’t that great, in my humble opinion.

I look forward to reading these new titles.

More Than Meets the Eye – Rodimus travels through space in an expedition to find the Knights of Cybertron.

Robots in Disguise – This series is set on Cybertron and has Bumblebee trying to restart a new golden age after the war that ravaged the planet.

Effective Question Techniques Teachers Should Use