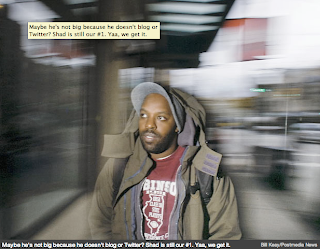 It was great to see such a list put together by our national newspaper. I actually have been impressed with the level of hip-hop reporting they have been doing lately. That being said, I don’t completely agree with this list.

The National Post’s words are italicized in red and my commentary is written below it.

10. Michee Mee: Still no other female Canadian MC has carried the weight of Michee.

What? Are you kidding me! What about Eternia?

When you think female rappers in Canada, these two names immediately come to mind. Michee Mee is a pioneer for sure but Eternia has been bringing fire to the microphone for over ten years. I think she is absolutely amazing and it’s a crime that she isn’t on this list.

I think D-sisive deserves to bit a bit higher up on this list.

Not mad at this entry at all.

7. Saukrates / Maestro: It’s a tie at number seven. These two are old school but Saukrates is killing it with his new song about Emily Haines. And without Maestro, there’s no list.

Okay, hold up. There wouldn’t be a Canadian hip-hop scene without Maestro. How can you possibly not give him his own ranking here?

Saukrates is a legend and I think he deserves to hold down this spot. Maestro should be higher.

6. Classified: Actually one of our truest hip-hoppers, Class has personality and rugged lyrics. If Canadian rappers were American, Classified would be from Brooklyn or the Bronx (instead of Nova Scotia)

5. K’naan: He’s colourful, charismatic, and a terrific writer blessed with a golden voice. His next move could be anything. Here’s hoping he decides to stay rap.

K’naan is incredibly hot right now and he’s got mad talent. No doubt about that.

4. Drake: Singlehandedly keeping Lil Wayne alive while he’s in prison, Drake is not only the most popular Canadian rapper of all-time, he’s also the smoothest, and nearly the best.

I hate to say it, but I think Drake is over-rated. His rhymes are quite simple (cat – hat, kind of stuff) I know that he’s got legions of fans worldwide though. I admit to enjoying some of his stuff. I just find that he can be hit and miss.

3. k-os: Gotta love his rock star approach and his lyrics. Who else drinks white wine in the morning when he must meet the press?

Loved this cat when he first came out. Love hearing him on the radio too.

2. Kardinal Offishall: The big boss of the Canadian hip-hop game, Kardi’s been number one for so long that it’s only his recent pop moves with Akon that found him losing ground to Shad. Kardinal is still a serious MC, though. There’s nothing we’d like more than rocking to him retake his crown.

Truly unique artist. Kardi deserves to be high on this list.

1. Shad: He had us convinced with his first Polaris-nominated record,The Old Prince last year, and blew us away. TSOL just dropped in the U.S., where he’s currently touring with k-os. Kanye – get ahold of this man, before you’re opening for him.

I’d like to rewrite this list a little. I don’t know what criteria was used for them but here is mine; lyrics, influence, and longevity.

I’d love to hear your opinions,

Would you rearrange the artists?

Who would you add?

Who would you leave out?

Hip-hop Ruling at the Junos