This is a short story I wrote entitled “Three Elusive Quarters”

It is fiction and told from the point of view of a ten year old girl. I thought I should make that clear since “I” on this blog normally refers to me and not a fictional character.

Let me know what you think.

I hope you enjoy the story.

I was born in 1999. For my “birthday” present, my uncle gave me a commemorative collection of quarters. There were twelve quarters in all, and each quarter had a different design on the front of it. I’m sure my uncle just wanted to give me something cool with the year I was born on it. He probably didn’t think how those quarters would come to define me, or did he?

We really only have one “birthday,” the day that we are born. So every year when we celebrate our birthday, we are really celebrating the anniversary of our birth. So for my first anniversary, also known as my first birthday, my uncle gave me another collection of quarters.

The first set of quarters celebrated the history of our great country from the very beginning of ancient times before Canada was even a word. The images cycled through prehistory to First Nation communities, to explorers to technology such as planes and trains, and finally to a panorama of tepees, skyscrapers, mountains, forests and the wheel of industry. 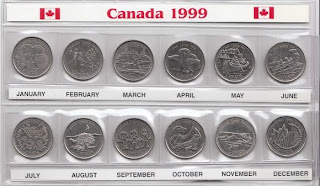 The second set of quarters moved to words such as pride, ingenuity, and achievement, and each one had an image to compliment the word. 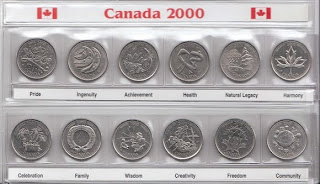 When my uncle was born, they only came out with one new quarter a year. He would search through his change and try to find the shiniest quarter from each year to save for his collection. If times were still like that I would be 57 years old, but I’m only 10. 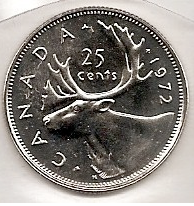 I haven’t been able to find all those quarters either. I’ve been on a mission to collect them all but there are a few elusive ones. I wish I had started collecting them when I was two since my uncle never bought me any other collections.

I asked him about it last year and he said, “It’s more fun when you have to find them yourself.”

It was easy to find all of the quarters for this year’s Olympic Games but I still don’t have the red Canada Day coin from 2002.

I’ve found quarters dating back to 1982 and have a solid run except for those three missing coins.

Last week I was at the supermarket when the gumball machine guy came to empty the machines and collect the quarters. I watched in amazement as he dumped loads of quarters into separate bags. A canvas bag for each machine. After he had done one machine, I asked him if I could sort through the bag.

He looked at me like I was a petty thief who would just grab the bag and run. Then he looked towards my mom.

“She really does collect coins.”

He looked back to me. “Alright, if it’s okay with your mom you can come to my truck and sort through a bag. I got a ten minute break now before I need to move on now anyway.”

The man let me go in his truck and dump a bag of coins on the floor. I knew I didn’t have much time so I sorted through them as quickly as I could. I kept an eye out for red ones but only found the poppy one, of which I have several.

When my ten minutes were up, I had nine quarters in my pile.

“Wow, that’s a pretty good haul,” she said as she looked at my sorting.

“Yeah, it is,” I said, “but I didn’t find those elusive three. These are all older ones.”

“So, it’s still good,” she said as she handing the man two dollars and twenty-five cents to make up for the quarters I was taking.

My collection is always growing but it seems that those three elusive quarters are still hiding. I will find them. I will. One day.

– a short story by Chase March