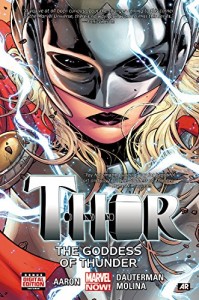 What a brilliant concept for a story about Thor.

The title has always been built around the theme “Whosoever holds this hammer, if he be worthy, shall possess the power of Thor.”

Unfortunately, Thor is no longer worthy to wield the hammer and as such Mjölnir is stuck without an owner. Every one tries to lift it and fails. Even Thor himself.

But some mysterious woman is able to pick up the hammer and wield it’s power. She becomes the new Thor.

Spoilers Below – I won’t reveal who the new Thor is though. I’d hate to do that to you. 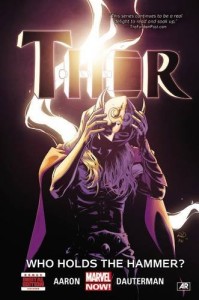 Thor – Who Holds the Hammer

The new Thor is trying to figure out how to be a hero like the previous Thor. She has a few hilarious run-ins, but is clearly capable of coming into her own and being the all-powerful super-hero we would expect Thor to be.

Meanwhile, Thor has come up with a list of people who could possibly have succeeded him in becoming Thor. He tracks each and every one down, hoping to find a way that he can regain his power and title.

When he finally does meet up with the mysterious Goddess of Thunder, he realizes that he still isn’t worthy to wield the hammer. He endorses her as the new Thor and we finally get to see who she is.

Read the Classics and Take Notes