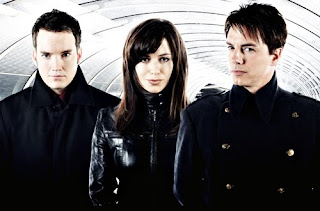 Any of my regular readers will know that I don’t have cable television. I get a few channels in using rabbit ears but for the most part, I rely on borrowing DVDs from the library.

I absolutely love that you can get full seasons of TV shows on DVD now. I’ve been enjoying several series that I would never had a chance to watch otherwise.

I’ve wanted to write about some of those series for some time now. I just haven’t gotten around to it. Yet.

Although tonight I need to correct that. I just finished watching Torchwood: Children of Earth and was absolutely blown away by it. It is amazing television.

I’ve written about Torchwood here before. It’s basically a spin-off of Doctor Who.

Back when it premiered, I faithfully watched the entire first season. Unfortunately, I haven’t had a chance to see the second season. Yet.

This latest release is the third season of the show and it is only five episodes in length. However, the five episodes are brilliantly written, suspense-filled, action-packed jewels that tell one complete story.

Here is a little background information about the show. (Spoiler Alert)

Torchwood is a secret organization that deals with otherworldly threats to Earth. It is headed by Captain Jack Harkness. In a episode of Doctor Who, Rose Tyler tried to save his life by tapping into a power she didn’t understand. The consequence is that in the process, she somehow made it so that he cannot die.

Jack is immortal, sort to speak. He can die but he always revives after a few moments. Well in this five episode arc some of his past sins catch up to him. Torchwood is destroyed and the remaining three members have to save the world without any of their resources. They become outlaws at a time when the people of earth, especially the children really need their help.

I really don’t want to give away any more of the story line. I think it is really worth checking out. It might be best to watch season 2 of Doctor Who first so you can see how Captain Jack Harkness comes to be. You could then watch Season 1 and 2 of Torchwood as well but I don’t think you really need to to enjoy the series.

Amazing television! I love when I can write those two words. It seems rare. That’s why I need to blog about it.

3 Comments on This Torch is Brilliant