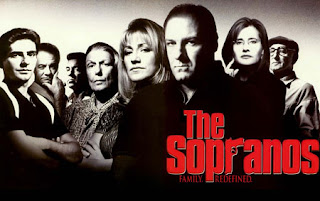 I don’t watch a lot of television. It’s not simply because of the limited choice I have with the rabbit ears on top of my TV set either.

I think it’s due to the fact that most shows seem to let me down. I haven’t had a must-see show in a few years, which I find to be really strange. There was a time when I had at least two shows on my schedule each and every night. I was a self-confessed couch potato.

Nowadays, I seem to be able to take it or leave it. I don’t really have any shows that I go out of my way to see.

Perhaps DVDs and the Internet have really changed the way I consume television.

For the most part, I rely on borrowing DVDs from the library to compliment what shows I can tune in.

I absolutely love that you can get full seasons of TV shows on DVD now. I’ve been enjoying several series that I would never had a chance to watch otherwise.

One show that really surprised me was The Sopranos. I didn’t think I’d like a television drama centred around the mob so I never paid any attention to it when it was on the air. However, I had the chance to discover it when I borrowed the DVDs from the public library. I quickly became a fan and worked my way through all six seasons in a few short months.

It is a really well-written show with some amazing characters and performances.

Here is a scene from a second season. Tony is the mob boss and has had a bad day. His teenage daughter seems to have withdrawn from him a bit. He’s upset about it as well as a few other things.

This scene is rather poignant and I like how it ends. It’s a great exchange between a father and a daughter.

Meadow: “I think you should go to bed.”

Tony: “I tell people you’re like your mother but you’re all me. Nothing gets by you. And I know you think I’m a hypocrite-”

Tony: “Yeah alright. Go ahead.” (plays with his glass)

Meadow: (stops and turns around on her way out of the room) “Sometimes, we’re all hypocrites.”

I like how the daughter says the exact right thing here. She doesn’t have to agree with her dad or what he does but she shows him that she understands. It’s exactly what he needed at that moment.

That is why I love that scene and this series.

I really like how Season 1 ended as well. It showed us a nice normal family. Of course, the head of this family also happens to be the head of the mafia. But that doesn’t seem to matter. You come to care about these characters and you become invested in them. That is the power of great television. And the Sopranos is a great show that is definitely worth checking out if you have not done so.