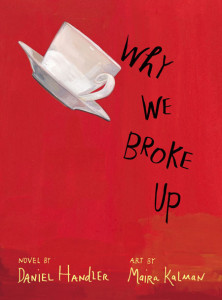 Why We Broke Up by Daniel Handler and Maira Kalman

Objects can hold so much power. Something as simple as a ticket stub, a folded piece of paper, and even a sugar shaker can help call up memories of long ago.

This novel centres around a box of keepsakes and memories that a teenaged girl decides to return to her boyfriend when their relationship comes to an end. She also writes him a rather lengthy letter detailing the real reason why they broke up.

Each object in this box has its own story. In the afterward to the novel, we find out that the art work actually came first. The two creators had previously collaborated on a picture book entitled 13 Words. And Moving forward, they decided this time around that the art would inspire the story.

I have had girlfriends that have collected the most insignificant things as keepsakes. I’ve never had them thrown back at me when the relationships dissolved though. It’s an interesting idea for a book. 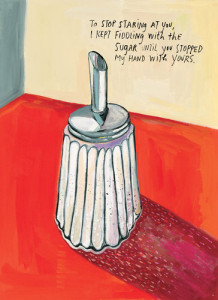 The illustrations add a nice touch to the items in the box. They help us understand why a highschool junior might keep these things.

There are a million reasons why some couples don’t work, and it feels like that was exactly the case for this couple. As such, the novel got a little slow in the middle for me. I almost put it down.

I think may people can relate to the story however. This is one of my favourite passages. In the middle of a fight, her boyfriend tries to compliment her by saying that she was different. To which, she replies,

“And the truth is that I’m not, Ed, is what I wanted to tell you. I’m not arty like everyone says who doesn’t know me, I don’t paint, I can’t draw, I play no instrument, I can’t sing. I’m not in plays, I wanted to say, I don’t write poems. I can’t dance except tipsy at dances. I’m not athletic, I’m not a goth or a cheerleader, I’m not treasurer or co-captain. I’m not gay and out and proud, I’m not that kid from Sri Lanka, not a triplet, a prep, a drunk, a genius, a hippie, a Christian, a slut, not even one of those super-Jewish girls with a yarmulke gang wishing everyone a happy Sukkoth. I’m not anything, this is what I realized … I like movies, everyone knows I do — I love them — but I will never be in charge of one because my ideas are stupid and wrong in my head. There’s nothing different about that, nothing fascinating, interesting, worth looking at.”

I think that is a sentiment, we can all relate to.

How to Survive as a Musician in Today’s Market