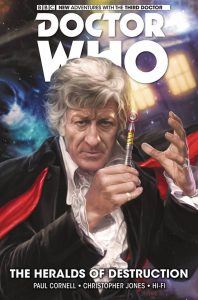 Doctor Who – Heralds of Destruction

The Third Doctor is no longer exiled on Earth. The TARDIS works and he is ready to go on an adventure, but before he can, a strange spaceship crashes and begins what looks to be a full-scale invasion.

Fortunately for the Doctor, his previous incarnation shows up  to help him battle this new foe. And just like the television series, UNIT is right there fighting alongside them. It feels like a natural continuation of the television series. The humour, action, and adventure are all there. And it just feels right.

This graphic novel has some great Easter Eggs for Doctor Who fans both new and old. It ties into the original series as well as the new incarnation by making references to the Tenth Doctor.

Unfortunately, this was the only mini-series produced for this incarnation of the Doctor. It was a great read and I would have loved to have seen more.

I Am Hip-Hop – Cool Conversations