I just finished watching Season 5 of The Walking Dead and saw these graphic novels in the public library. Pretty soon, the television series will be completely caught up with the books. I wonder what will happen then?

I try to write my reviews without spoilers, but if you are a big fan of the books, you might not want to read any further today. 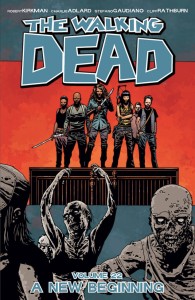 The survivors of the zombie apocalypse have rebuilt society. They have a village that is reminiscent of the pioneer times we learned about at school. It’s incredible to see things starting to come together.

There is still work to be done, however. Giant heards of the undead travel en mass. A team has been dispatched to steer them away from the village. Unfortunately, they drive a heard directly towards another group of survivors. 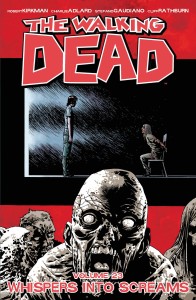 Carl wants a job in the new society, but he wants a very specific one that will have him working quite a distance away from his dad. Rick is very reluctant to let him go. He is a little unweary of the new settlement and falling into a life that seems to be returning to normal.

Meanwhile, on a mission outside of the village walls, a team swears that they hear the walking dead whispering. They seem to be smart and communicating with each other. It is absolutely terrifying, more so than usual.

They also welcome a young lady into the village and Carl is completely taken by her. But is there more to her than what he sees?

I am really enjoying this series, both on television and in the graphic novels.

Transformers: In the End there is Chaos