The first four volumes of Superior Spider-Man were very well done and I thoroughly enjoyed them. These last two issues bring the story to its natural conclusion. 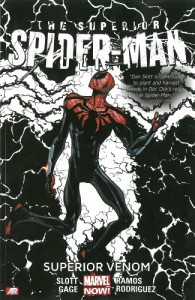 Flash Thompson has been able to use drugs and his will to keep Venom under his control, or so he thought. When the alien symbiotic leaves him to rejoin Spider-Man, Otto Octavius believes that he can control him as well. He relishes the new power, but perhaps he is not greater than Peter Parker and will fail to control the alien as well. 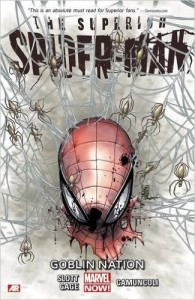 Doc Ock has been living as Spider-Man for years now. He has done his best to rid the city of the criminal organizations that have terrorized it for years. He didn’t realize, however, that the Goblins had grown to form an entire nation right under his nose.

Meanwhile, Peter Parker has fought to regain consciousness and take control of his body, and life, once more. This is the final battle between them. We will find out who the Superior Spider-Man is after-all.