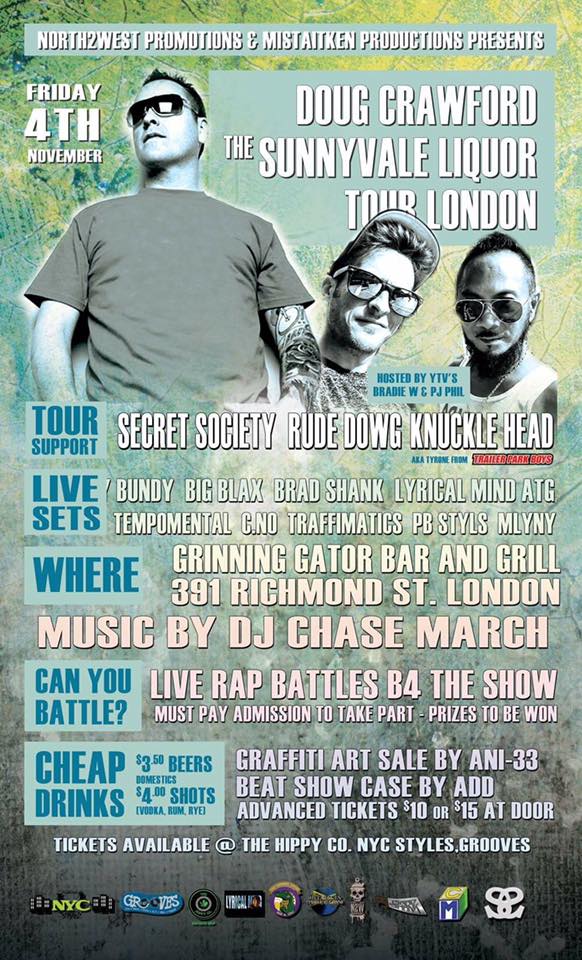 Hosting this event is the duo of YTV’s Pj Phresh Phil & Bradie Whetham! Pj Phil was a mainstay in the 90s with his show The Zone. He is the current host of Session X and will be bringing his 90s Retro Vibe with him.

Bradie W is a Canadian actor and entertainer known for his roles on such shows as; Goosebumps & Wind At My Back. Bradie is also a musician and will be performing a set for the first time in over 3 years.

First Ever by N2W ( CAN YOU BATTLE ? )Open Mic Rap Battle…

There will be a open mic rap battle one hour before the show starts over AdD beat’s, with special guest judges. If you win the battle, you will win some merch ,2 exclusive beats, and a feature with a Secret Society artist. You will also get a spot on the next North2West Promotions Show in any city )

Doug Crawford, also known as one half of the Canadian rap group Secret Society, has broken out as a solo artist and is bringing his impetuous flow to the masses. Crawford’s ability to channel his thoughts and feelings into astute and opulent rhymes is what continues to draw in the fans, and the release of his 3rd album F.A.M.E – For All My Efforts makes a strong statement about his talent, his work ethic, and his drive to break through.

Crawford’s LA upbringing seeded the inspiration for his future endeavors and laid the foundations for working with some of the same artists that he grew up listening to – having opened for Ice Cube, Mobb Deep, and Snoop Dogg among others.

Crawford has sold tens of thousands of albums and collaborated with legends of the game, including Royce Da 5’9″, The Outlawz, and Obie Trice. His reach only widens via extensive international press attention and radio play, yet Doug Crawford’s focus remains about the impact his music can have on others. In his own words, “I work hardest on improving my music and changing it with the times.” He’s ambitious, up and coming, and hard to miss; Doug Crawford’s time is now.

Doug has been taking the global scene by storm now performing to larger audience than ever before. With fans now spanning the globe Doug is poised for breakthrough success. Watch for Doug Crawford to establish a serious international presence for himself in the near future!

Visit the links to learn more about Doug Crawford

Tyrone Parsons is an actor, best-known for the role of T, a member of J-Roc’s Roc Pile. from Trailer Park Boys.

Parsons was born and raised in Lucasville, Nova Scotia. Tyrone has had an active rap career under the name Knucklehead.  Since 1993, beginning with an association with Atlantic rap troupe DJ Ruckus and Mad Craz. This association landed him a record contract under which he collaboratively released two albums and conducted three tours with other rappers.

After appearing in a music video by Classified, he began to make the move to TV, landing an audition with Mike Clattenburg who was casting the Trailer Park Boys series at the start of its run. Even after landing the role of T, Parsons remained in the rap game, signing first with Change The Game Records (home to Anonamyss), then left with some the artists under this label to form Musik Overmatter, an independent label. Since then he has played a major part in the production and release of several albums, and released his first solo record, KnuckleUp in 2005, and a Mad Craz record in 2008.

In the show, T is sometimes referred to as T-Knuckles, a subtle nod to Parsons’ real life rap persona.

For more information about this concert, check the Facebook Event Page.

I hope to see you there on Friday. It’s going to be a great show!