This Song Will Save Your Life by Leila Sales

Elise Dembowski is fifteen years old and determined to turn her life around. She thinks that if she studies popular culture over a summer that she can fit in better at school. She will no longer be an outcast. She spends months looking at magazines, doing research, and learning all sorts of trivial information so she can carry on conversations with other students. But even she can’t stand the music that most of her peers consume.

“The one thing I couldn’t bring myself to do was listen to the music. I tried, for nearly an hour. Then I gave up. It was bad. . . The popular music wasn’t interesting-bad, it was bad-bad. Auto-tuned vocalists who couldn’t really sing; offensively simplistic instrumentation; grating melodies. Like they thought we were stupid.”

What a brilliant observation about modern-pop music.

It’s nice to see that Elise has taste when it comes to music. It will serve her well in the future, even if she doesn’t know it at the time. She thinks she has nothing going for her and it is really sad. She’s a smart kid with a lot of potential.

She starts sneaking out of the house at night and going for walks. On one such stroll, she happens to come across an underground dance club and it changes her life. She discovers that she has a talent for DJing and throws herself into it with the zeal she always puts into things that interest her.

Here’s a passage from the audiobook where Char teaches Elise about the important aspects of deejaying.

Here’s a great quote about what it feels like to DJ to  responsive crowd.

“The night was a success. The dance floor was full; a pulsating mass of bodies moving to every track I played. Char talked about reading the crowd like you’d read a book, but tonight I had moved beyond even that. It felt like invisible veins and arteries ran between me and every person in that room, communicating information between us instantly and noiselessly. It wasn’t like reading a story. It was like I was writing a story” 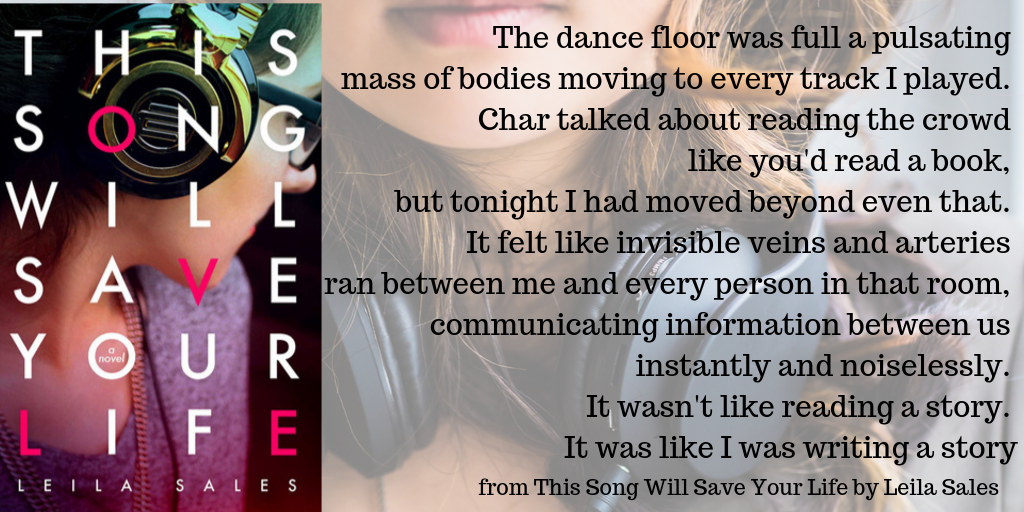 I couldn’t have said it better myself. This is definitely one of my new favourite quotes.

This was a great read and you will like the story even if you aren’t a DJ.