“If your work is going to have an impact on the world, that means some people are really going to like it. And some people won’t.”

And in this day and age, certain people feel that they need to express their negative opinions publicly through blog comments, Facebook rants, and other such avenues.

Why just last month, I received this rather negative comment here on Silent Cacophony.

Now, I know that people read my work, listen to my radio show, and follow my podcast. I have numbers to back that up as well. But, that comment did bother me for a moment or two.

I considered deleting it. If a comment doesn’t add to the discussion and was just meant to be cruel. I see no reason to keep it on my site. I have the control over that. At least I do here on my personal blog.

Instead, I replied in kind. 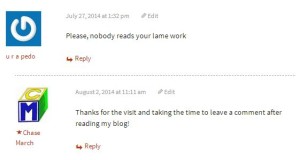 I decided not to be negative and thanked this anonymous reader for not only reading my blog, but for taking the time to leave a reply.

I didn’t let one negative comment ruin my day.

Here’s a tip you can use to help you channel any similar negativity away from you. It’s called . . .

“Use the Sometimes Game every time someone says something that pushes your buttons, and you will find yourself becoming a calmer and more gracious person.

To play the Sometimes Game you need to write done something, right off the top of your head, that someone might say about your work that would really, truly hurt your feelings. Maybe it’s something like ‘You are such a fraud’ or ‘Your work is boring.’

Now go back and, rewrite each sentence in the first person (‘I am…’ instead of ‘you are…,’ etc) and add the magic word sometimes to the end of each one:

So now you can read your first sentence as, ‘I am such a fraud . . . sometimes.’

Now—this is the fun part—we’re going to do the same thing with compliments.”

It’s a simple exercise that I discovered in the book Get It Done: From Procrastination to Creative Genius in 15 Minutes a Day. 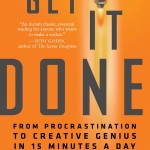 It’s worth the read and definitely worth your time to try this simple game. Don’t let one negative comment ruin your day or take up any more than a small moment of your time. Reflect, move on, and continue to put it the work. Because some people will appreciate it. That’s who you want to create for!