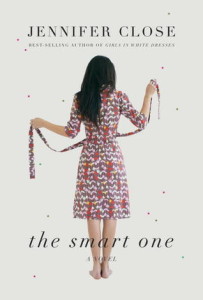 The Smart One by Jennifer Close

The title character of this novel was labelled by her parents as “the smart one.” However, she is not feeling very smart at the moment. Her three adult children don’t quite have it together the way she had expected them to. Her oldest, has left the profession of nursing and is working in retail. She knows that she doesn’t have things together, but doesn’t know where to turn. She runs out of money and is forced to move back home to figure things out and catch up financially. The middle child has just called off her engagement and dumped her fiance. And the baby of the family is in college and getting into a pretty heavy relationship.

This is family drama much like you would see in prime-time television. It would actually make a good series. It’s interesting to see how the labels we put on children can ultimately put limits on their potential. The title character rebelled against her label and “married well” whereas her sister, the so-called “pretty one,” wasn’t able to do that.

The Smart One is a well-written novel that I enjoyed right up to the end. I say that because the end seemed to come up out of nowhere. The book ended in midstream. Maybe that is another reason this would make a good television series. It surely could have continued on. That being said, the novel could have had a better ending too. I much prefer to have closure at the end of a story, even though this is the kind of ending  a lot of stories have these days.