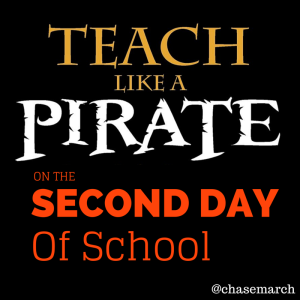 This is the second in a series of posts on how to Teach Like a Pirate, a really cool and engaging methodology by Dave Burgess from a book of the same name.

Day two of the school year starts with my opening ritual that was a part of their “Good Morning Training” from the first day.

I then turn off the lights, return to the front of the room , and transform myself into a airplane.

Burgess describes in detail how he does this, how he crashes into a body of fictional water, saves fellow passengers from the plane, how they float away on a raft, and finally find safety on an island. It’s an impressive piece of pantomime that will more than likely throw students off. It’s not a typical way to start a lesson, but it is very engaging and has a purpose.

A helicopter comes to rescue the survivors but there is a problem. The pilot admits that he is lost and more than likely won’t be able to find this island again.  He also only has room for 5 of the 10 survivors.

It is now up to the class to decide who will be saved and who will have to fend for themselves on the island. The students work in groups of four students to come to a consensus.

The teacher has to provide them with a list of ten characters who survived the plan crash. Each of whom have been specifically designed to spark debate and discussion.

The Goals of This Lesson

This exercise accomplishes two main goals. First, they are once again socked in the stomach with an outrageous and outside-the-box intro to the period that is not only bizarre, but highly entertaining.

Secondly, I get the chance to discuss group dynamics, the collaborative process, and the procedures we use to get into groups, all in the context of a fun, engaging activity that does now have any particular right or wrong answers.

The answer to who is rescued and who stays on the island doesn’t matter; it is the process that is important. I emphasize that they must bot only come to a consensus, but they must be able to justify their answers.

This is No Ordinary Class

After two days, every student has introduced themselves to the whole class and has participated in a collaborative group. In addition, they have yet to see anything resembling an ordinary class experience.

Dave Burgess sets up his class like a television series. He hooks students with a teaser, gets them engaged in the process, and then leaves them wanting more with a brief glimpse of what is to come.

Teach Like a Pirate Series – Part 3 coming next month!

Teaching Tip – Get Them Writing