I’d been wanting to read this title for some time now. I finally got around to it, thanks to the Marvel Unlimited Comics App on my iPhone. They had a one month special subscription price as a special comic-con deal that I just had to take them up on.

I read all of the graphic novels in this series, the original death of Peter Parker storyline in The Amazing Spider-Man, and all of The Superior Spider-Man titles as well. That was well worth with $1.99 subscription.

I’m thinking of buying a yearly subscription as well. It really is worth it to be able to read all of theses great comics anytime on my phone. 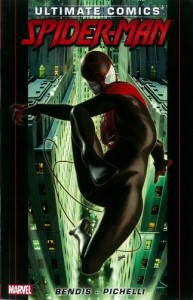 Miles Morales becomes the new Spider-Man but his powers are a little bit different. He has a venom strike that shocks his enemies much like a tazer. He also has the ability to camouflage himself by blending into the background of his environment. The really surprising thing is that he doesn’t have the ability to shoot webs.

I like the fact that he has a Black father and a Hispanic mother. He also has his own identity and the story doesn’t feel like a retread of the original Spider-Man we all know and love.

Brian Michael Bendis did a great job of relaunching the iconic character for a new generation in the Ultimate Universe. It compelled me to read more immediately. 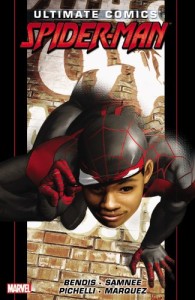 Peter Parker’s Aunt May, Gwen Stacy, and Mary Jane Watson share with Miles their stories and give Miles the encouragement he needs to continue as Spider-Man. They also give him Peter Parker’s web-shooters. Spider-Man is back and swinging from webs once again. Seeing Miles learn how to use them was hilarious and uplifting. I loved it! 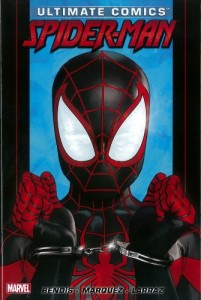 The new Spider-Man gets to join The Avengers, despite Captain America’s objections. Miles also finds out that his uncle isn’t exactly the man he thought he was. And even worse, he discovers that Miles is a super-hero and tries to use him to advance his own criminal career. 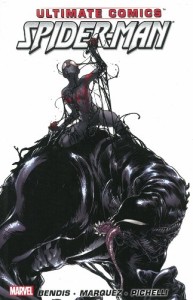 Enter Venom and family tragedy. This was a story that had me on the edge of my seat. 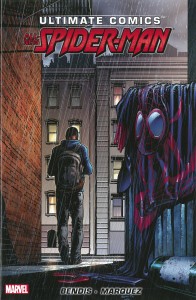 This image is so iconic and I’m glad they used it in the new Spider-Man series. It makes sense for Miles to pack it all in. He takes a break for close to a year, but he truly is Spider-Man now and is needed. He gets some great encouragement and finally realizes his destiny as a crime-fighting superhero.

I really enjoyed this read. It was a great series that I would have loved to seen continue. But fortunately, I have this app on my phone and can start reading the other new Spider-Man title, The Superior Spider-Man.