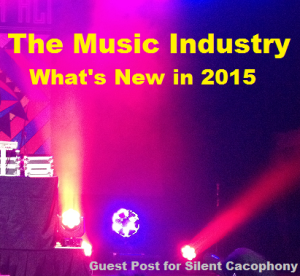 Music has three personas – the artistic side, the legal side, and the business side. And every year, consumers are in for some surprises, and 2015 will probably be no different. Here are some phenomena and issues that we are likely to see over the next 12 months.

Probably the biggest issue during 2015 will be the current battle between Pandora and The Turtles about royalties on music created prior to 1972. For those of you who are unfamiliar with the issue, current law does not allow copyright law to apply to any music recorded before 1972. No, in Congress, sits the Respect Act – a law that would expand copyright law, so that these artists would be covered and would indeed receive royalties when their music is played.

Additional legal issues will continue to revolve around streaming, and how artists should or should not be compensated by sites such as Spotify and Pandora. The issue is one of fairness. A music streaming site can allow users to listen free amid all sorts of advertising which gives huge profits to the site owners and to the advertisers but not to the artists. For this reason Taylor Swift and several other artists have pulled their music from such sites as Spotify, and it is anticipated that more will do so as this year progresses. Streaming sites may in fact lose significant revenue and ultimately fold. Apple will certainly be the first of such sites to “fold,” because it really got into this niche late and it is definitely not going to be profitable!

Predictions for 2015 in this realm are a little more difficult, but the experts seem to agree on the following:

Certainly, there are a number of surprises in store for us this year that can not be foreseen, just like last year. All in all, however, it will be an exciting and new!

BIO: Armed with a Master’s in Journalism and strong wanderlust, Kateline Jefferson set out to explore exotic places, financed by her freelance writing. She is now a regular blogger for Premier Essay and sells feature articles to English-speaking publications around the world.

The Return of Teaching Tip Tuesday!

This movie is WONDERful!

Healthy Lunches that Kids Will Love