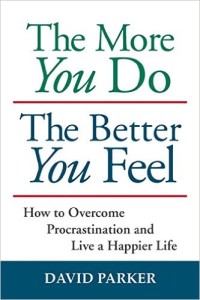 The More You Do, The Better You Feel: How to Overcome Procrastination and Live a Happier Life by David Parker

I received this book in the mail a little while ago and I kept putting off reading it. I’m not sure why. I knew there were things I procrastinated about. I knew it. But I also knew that I kept putting those same things off.

For all of us that have that problem in life, this book offers some great advice and ways to combat it.

Here is how David Parker explains the concept of the book . . .

“If you work at overcoming your own habitual procrastination you’ll start overcoming the fear that has interfered with your ability to deal with the tasks and projects that you’ve learned to automatically shy away from. You’ll discover that you are far more capable than you thought possible, and your new definitions of yourself will be based upon newer self-beliefs garnered from positive experiences.”

He suggests writing in a journal and he shares how that simple act helped him break out of his funk. He writes, “I accumulated enough material to begin taking a look back at what I had written, and this presented me with an opportunity to observe the ways and patterns in which my mind worked.”

And then something interesting happened . . .

“it was if all those reminders had connected in some odd way . . .  There seemed to be a relationship between the length of time a task was left undone, and the effect it was having on my emotions. The connection was so real; it felt almost palpable.”

Sometimes, all you need to do is take a step back and get some real perspective.

How It Applies to Teaching

Another strange thing happened to me while reading this book. I began to see some of my students within the pages. Some of them don’t like school and try their best to avoid doing work. Many of them get through their academic career doing very little.

“Many habitual procrastinators have remarked that they began noticing what they could get away with from an early age. The practice is commonly called getting over on others.”

Some students put more effort “into the act of not doing” than it would take to just do the task before them. And “if [they] continue the act of getting over on others, it can be difficult to put an end to this sort of practice. After all, who wants to give up a skill that they’ve worked hard at developing over a lifetime?”

Reduce the Number of Tasks

Reduce the number of tasks you have to do. This way, you won’t feel overwhelmed, and you can get more done. And the more you do, the better you feel.

It reminds me of a phrase that I have heard time and time again. I never quite understood it though.

Give it to a Busy Person

I am a member of The Lions Club, a service organization run by volunteers. At one meeting, we needed a member to take on a specific task. I was too busy to volunteer for this particular task. I was surprised to see that no one else stepped up for several seconds. Then finally, one person agreed to take it on. The member beside me said, “Want something done? Give it to a busy person” and we talked about how he might have been the person with the most on his plate.

The More You Do, The Better You Feel

So, we can see that the title of this book goes beyond the procrastination aspect. I do a lot of things; I skateboard, write, produce a radio show, DJ at live events, do some community theatre, work a few jobs, and make time for my family and girlfriend. And I feel good about being able to do all of that.

I took lots of notes while reading this book. I just might have to write an additional blog post or two. Let’s see if I have time to do that.

The Death of Wolverine

Ghost and Laundromats Come Together in “Sheets”