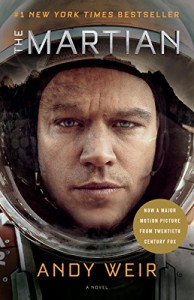 The Martian by Andy Weir

During an intense storm on Mars, the crew of Ares 3 are forced to cancel their mission and evacuate. As the astronauts battle wind and the elements, Mark Watney, is struck by debris. His suit is punctured and the life-sign readings fall flat. The escape rocket is starting to tip over and if they don’t act fast, the entire crew will perish. Believing Watney to be dead, they launch and leave him behind.

Watney regains consciousness and makes it back to the base. Apparently, whatever impaled him had allowed his blood to coagulate around it and form a seal in his space suit. The only problem is that he cannot communicate with his crew or with N.A.S.A. He is utterly alone on an alien planet with little hope of rescue.

It doesn’t sound like a comedy, but this book is full of hilarious moments. Watney uses humour to help himself get through the tough times. There is plenty of suspense as well. I thoroughly enjoyed reading it.

The film makers did a good job of adopting the story. They managed to keep the tone of book and include much of the humourous moments. Unfortunately, they did lose a lot of the life and death  moments that had me flipping pages and not wanting to put the book down. The few that were in the movie didn’t have me on the edge of my seat as much as I was in my initial reading. The final rescue scene was brilliantly shot and I was on the edge of my seat for every second of it.

Read it and then watch it. Or if you have already watched it, read it and get even more in-depth with the story and all of the suspense and comedy it holds. You won’t be disappointed.