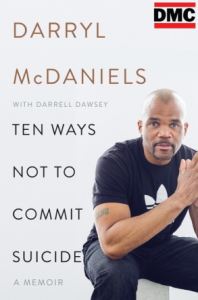 Ten Ways to Not Commit Suicide by Darryl McDaniels (DMC)

I am a huge Run-DMC fan. They are my all-time favourite group. So when I saw this book at the public library, I knew I had to pick it up.

I had heard DMC talking about this book on the radio, and to tell you the truth, I wasn’t that interested in reading it. Maybe it was the awkward title. Maybe it was the fact that Run-DMC disbanded when Jam Master Jay died over 10 years ago and I haven’t paid much attention to the solo carreers of Run or DMC since then.

When I saw that this book was available for me to read for free, I knew I had to check it out. I found out a few things I didn’t know about Run-DMC. I thought they were cool with each other and made music together in a creative partnership. DMC doesn’t paint that picture in this memoir. He writes of his unhappiness with the group often. He also has nothing positive to say about Run. He doesn’t blame Run for anything and he doesn’t air any of his dirty laundry. This isn’t a tell-all book. It isn’t a self-help book either. It’s simply a memoir from an artist who almost fell victim to the music industry.

DMC writes how he drank to relieve the anxiety he felt when performing live. It quickly became a problem for him as he slid down to alcoholism. It’s almost hard to believe that any one person could drink as much as he did. And it almost killed him.

He tells us of his childhood passions and how they took a backseat to his rapping career. He is working hard to fulfill some of the dreams he put on hold when he became the King of Rock.

I am glad to see that DMC made it through the dark times and that he is still here in this world. Run-DMC are an historic group that deserve all the praise and recognition that they get. I wish things could have ended better for them. I wish Jay hadn’t died. I wish that they had released the 20th Anniversary album and launched the tour that was speculated just before Jam Master Jay’s untimely passing.

We won’t likely see a Run-DMC reunion, but we can continue to play their music and sing their praises. And we can read this book.

The Death of Ultimate Spider-Man